The Reality of Raising Taxes at the Top, Part 5: Can Tax Increases Help Economic Growth?

In this blog series, and in our new report, we’ve considered how raising taxes at the top might affect economic growth.  We’ve found no convincing evidence that raising taxes at the levels that policymakers are considering would negatively affect high-income people’s reporting of taxable income, the amount they work, their saving and investment, the health of small businesses, or the rate of entrepreneurship.  But what if we look directly at the relationship between taxes on high-income people and growth? 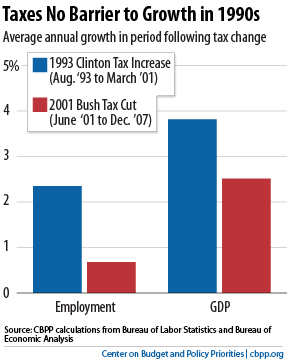 History shows that higher taxes are compatible with economic growth and job creation: both grew more strongly following the Clinton income tax increases on the highest-income households than after the Bush tax cuts.

The Clinton-era tax rates and revenues enabled budget deficits to fall, increasing national saving and reducing the long-term costs of borrowing, and this may have enabled the private sector to increase investment in ways that improved growth.  Similarly, the Congressional Budget Office finds that letting the Bush tax cuts expire on schedule would strengthen long-term economic growth, if policymakers use the revenue to reduce deficits.

That’s critical: how the government uses the revenue generated by tax increases largely determines how the tax hikes affect growth. Cuts or increases to tax rates do affect behavior, Urban-Brookings Tax Policy Center co-Director William Gale told journalists during a conference call last week.  “[B]ut they also have effects on the deficits, and those deficits’ impact on growth can be far larger than the incentive effects that are created.” (You can listen to the call here.)  What’s more, the revenue from tax increases can fund — or prevent cuts to — investments in areas that support economic growth, such as infrastructure and education.

Tomorrow, in the final installment of this series, we’ll look at how policymakers might consider raising taxes at the top.

The Reality of Raising Taxes at the Top, Part 1: Would Tax Hikes Shrink Taxable Income?

The Reality of Raising Taxes at the Top, Part 2: Would Tax Increases Affect Work Effort?

The Reality of Raising Taxes at the Top, Part 3: Would Tax Increases Affect Savings and Investment?

April 27, 2012
PreviousAn Easy Call on How to Pay for Student Loan Plan
NextCostly Tax Plan Advances in Kansas
Stay up to date
Receive the latest news and reports from the Center