The Latest on State Budgets

Our new analysis of state budget shortfalls shows that states’ problems are far from over:
Image 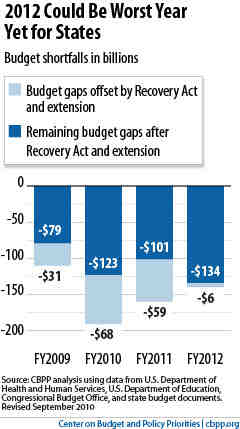 In fact, 2012 could well be states’ most difficult budget year since the start of the recession.  Even though state revenues have leveled off after collapsing in the recession, federal assistance to states — mostly from the 2009 Recovery Act — will largely have been used up by the start of fiscal year 2012.  That assistance has prevented state cuts in public services — which have been both deep and broad — from being even more severe. We project that the gap that states will have to fill on their own, once the federal assistance has disappeared, will be larger in 2012 than in any of the past three fiscal years (see chart). Why are states still in such bad shape?  As my colleague Nicholas Johnson explained, state revenues remain well below pre-recession levels even with the current signs of improvement.  At the same time, the need for state services — which rises in a recession as residents lose jobs, income, and job-based health coverage — remains high. The bottom line?  State revenues are not nearly adequate right now to sustain the level of services that states must provide. That’s why states need to take a balanced approach to closing their shortfalls, one that includes new revenues and not just severe cuts to services.  States can’t count on a swift economic recovery to close the gap between rising needs and shrunken revenues.  Those problems are likely to linger for some time to come, based on available evidence and past experience.  Instead, states should minimize the damage that their budget shortfalls inflict both on the economy and on their most vulnerable residents.
Topics:
State Budget and Tax, Economy
PreviousNew Report Details Job-Creating Impact of Jobless Benefits Extension
NextGreenstein Debates Tax Cut-Unemployment Deal on MSNBC’s “The Last Word”
Stay up to date
Receive the latest news and reports from the Center