The Latest on State Budgets

Most states started their 2011 fiscal year on July 1, and we’ve updated our analysis of the budget shortfalls — that is, the gaps between revenues and spending — that states closed when adopting their budgets.  As the map shows, nearly every state faced a shortfall for 2011; in 18 states, the shortfall exceeded a fifth of the state’s spending. 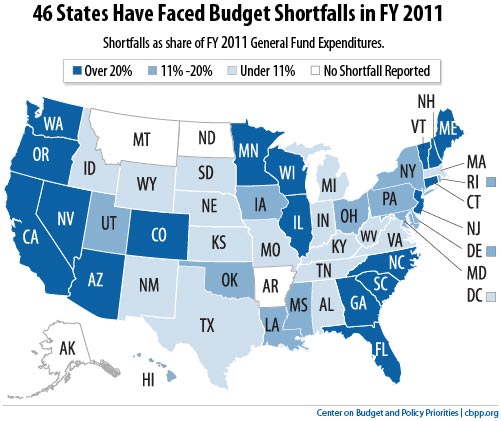 For 2012, states face an estimated $120 billion in shortfalls, and they’ll receive virtually no Recovery Act assistance, the vast majority of which will have expired.

Share
Facebook Twitter Print Email
PreviousAn Ounce of Prevention
NextIn Case You Missed It...
Stay up to date
Receive the latest news and reports from the Center