The Dividend Tax Cut: Not Supporting the Stock Market or the Economy

President Obama’s proposed budget would move toward past practice by taxing dividend income for higher-income earners at the same rate as ordinary income, beginning in 2013 (see chart).  The change would reduce deficits by $108 billion (including interest on the debt) over ten years.

Some claim this would crash the stock market and hurt economic growth but the facts debunk those assertions. 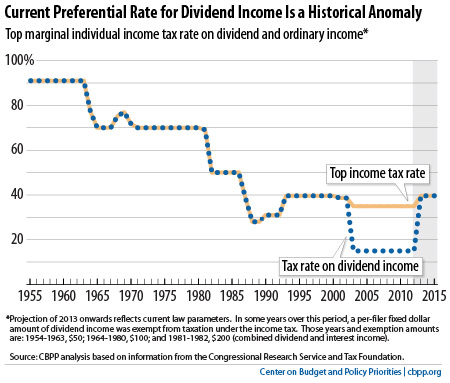 There’s also no evidence that the 2003 dividend tax cut enhanced economic growth. As the Congressional Research Service finds, “…there is no reason to connect that dividend [tax] cut to savings and growth.”

There are much better ways to support the recovery:  Moody’s Economy.com chief economist Mark Zandi estimates that extending the improvements to the Child Tax Credit that Congress enacted as part of the 2009 Recovery Act would boost economic growth more than three times as much as extending the capital gains and dividends tax cuts per dollar of budgetary cost.