The Case for a Stronger Minimum Wage

A proposal before Congress to strengthen the minimum wage would help low-wage workers while having little impact on employment, our new report explains.  Here’s the opening:

The Senate is soon expected to consider a proposal to raise the minimum wage from $7.25 to $10.10 in three annual increments and then index it to inflation.  The proposal — the Fair Minimum Wage Act of 2013 (FMWA), introduced by Senator Tom Harkin (D-IA) — also would raise the subminimum wage paid to those who also receive tips, which has been frozen at $2.13 for over two decades.

The FMWA would provide low-wage workers with a much-needed boost to their paychecks:  today’s minimum wage is 22 percent below its late 1960s peak, after adjusting for inflation.  It also would help offset some of the unfavorable trends facing low-wage workers, including stagnant or falling real wages, too little upward mobility, and a deep deficit of bargaining power that leaves them solidly on the “have-not” side of the inequality divide. 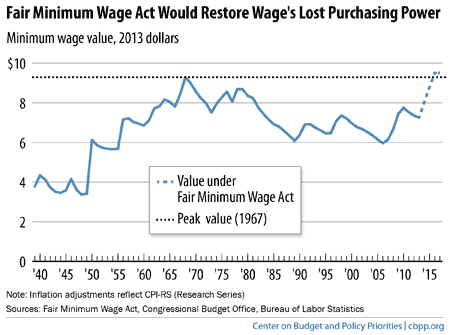 The common claim that raising the minimum wage reduces employment for low-wage workers is one of the most extensively studied issues in empirical economics.  The weight of the evidence is that such impacts are small to none, and that minimum-wage increases of the magnitude that have been enacted in the past — and that would occur under the FMWA — are a clear net benefit to low-wage workers as a group as well as a policy tool that pushes back against rising inequality.

Some opponents of raising the minimum wage also claim that it would primarily benefit teenagers working for extra money.  To the contrary, the vast majority of those who would benefit are adults, most are women, and their families depend on their paychecks; the average worker who would benefit from the FMWA brings home half of the family earnings.  This reflects the fact that the low-wage workforce has gotten older and more highly educated in recent decades:  between 1979 and 2011, the share of low-wage workers (those earning less than $10 per hour in 2011 dollars) aged 25 to 64 grew from 48 percent to 60 percent, while the share with at least some college education grew from 25 percent to 43 percent.

In addition, though opponents often suggest that the existence of the Earned Income Tax Credit (EITC) obviates the need for a minimum-wage increase, both a strong EITC and an adequate minimum wage are needed to ensure that work “pays” for those in low-wage jobs.  The two policies are complements, not alternatives.

Slowing of Health Care Spending Is Good News for the Budget