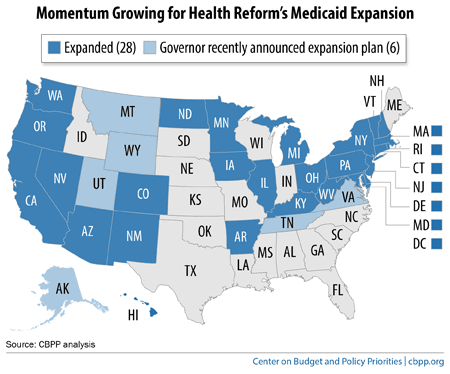 If the federal government and Tennessee’s legislature approve it, Governor Haslam’s “Insure Tennessee” plan would extend coverage to more than 200,000 uninsured Tennesseans through a demonstration project, or “waiver.”  The federal government has approved four states’ expansion waiver proposals, which give them added flexibility over their Medicaid programs. Insure Tennessee contains elements that the federal government has approved for other state waivers.  As in Michigan, for example, newly eligible Tennesseans with incomes above the poverty line would make monthly contributions to individual accounts to cover their premiums and cost-sharing charges.  As in New Hampshire, newly eligible Tennesseans who had an offer of coverage from their employer but couldn’t afford the premiums would get help buying it. To date, only three southern states have expanded Medicaid, which means most of the region isn’t experiencing the positive impacts from expansion.  The Kaiser Family Foundation reported that 86 percent of Americans in the “coverage gap” — with incomes too high for Medicaid but too low for federal subsidies to buy coverage through the marketplace — live in the South. Among the three southern states that have expanded Medicaid, Arkansas and Kentucky report the nation’s largest drops in their uninsured rates this year (10.1 and 8.5 percentage points, respectively), and West Virginia’s uninsured rate has dropped 5.7 points. Elsewhere in the South, Virginia Governor Terry McAuliffe will include a Medicaid expansion in his forthcoming budget, North Carolina Governor Pat McCrory has softened his opposition to expansion, and a group of Florida business leaders have unveiled their own expansion proposal.  These states, along with Tennessee, could take a big step toward closing the nation’s coverage gap.