March is women’s history month and income taxes are due in April.  So it’s a good time to note the difference that tax credits for working families, such as the Earned Income Tax Credit (EITC) and Child Tax Credit (CTC), make for women’s economic security. 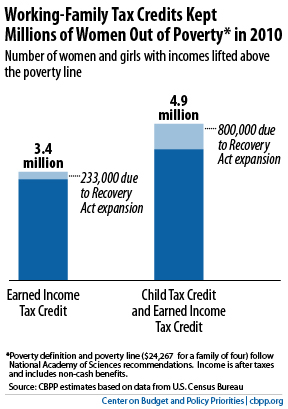 The EITC is enormously successful at
encouraging work
and boosting earnings among low-income single mothers and is strikingly effective at reducing poverty.  Using data and procedures explained here, I estimate that the EITC kept an estimated 3.4 million women and girls above the poverty line in 2010.  That figure includes the effect of temporary 2009 Recovery Act expansions in the EITC, which alone kept 233,000 women and girls above the poverty line.

Further, research suggests that the EITC may continue to improve these women’s economic security even after they retire.  In a new Congressional Budget Office working paper, researchers project that by raising employment and earnings levels for working-age women, the EITC will boost their Social Security retirement benefits.  That’s because your Social Security eligibility and benefit levels are based on your prior work and earnings history.

The vast majority of seniors rely heavily on Social Security benefits in retirement, but these benefits are especially critical for women and low-wage workers. That the EITC is expected to boost Social Security receipts and benefits among low-wage women is just one more way that it provides economic security by promoting and supporting work.

Low-Income Programs Would Bear the Brunt of Ryan Cuts

February 10, 2012
PreviousRepublican Study Committee's Medicaid Cuts Even Bigger Than Ryan Plan's
NextMore Bogus Economics from the Medical Device Industry
Stay up to date
Receive the latest news and reports from the Center