TANF Block Grant No Model for Other Safety Net Programs

While some leading conservatives have hailed the Temporary Assistance for Needy Families (TANF) block grant as a model for reform for Medicaid and other safety net programs, TANF’s poor response to the recent recession highlights the weaknesses of a block-grant structure.  Here’s the opening of our new report on this issue:

Leading conservatives in Congress – including House Budget Committee Chairman Paul Ryan – as well as some conservative activists and commentators have recently cited welfare reform and the TANF block-grant structure as a model for reshaping the federal-state funding relationship in other programs for low-income families, such as Medicaid and the Supplemental Nutrition Assistance Program (SNAP, formerly known as food stamps).  The TANF block grant, however, is not the shining success that they suggest.

The recent recession has exposed serious weaknesses in TANF’s ability to respond to significant changes in the economy, resulting largely from its block-grant structure. Under TANF, federal funding does not rise when caseloads increase in hard economic times – unlike TANF’s predecessor, Aid to Families with Dependent Children (AFDC), under which the federal government shared the costs of increased caseloads with the states.  With AFDC, federal funding rose automatically during economic downturns as state caseloads expanded, enabling states to respond to rising hardship and poverty. 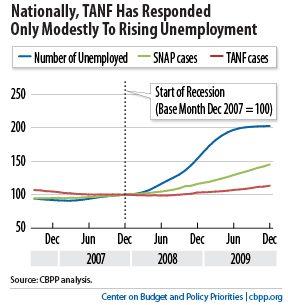 Under the TANF structure, many states’ TANF programs have responded inadequately — or not at all — to the large rise in unemployment during this very deep recession, leaving large numbers of families in severe hardship.  In 16 states, TANF caseloads rose by less than 10 percent between December 2007 and December 2009; in six states, caseloads actually fell.  This performance contrasts sharply with SNAP, where funding expands automatically to respond to the rising need for food assistance.  In fact, the number of SNAP participants rose by 45 percent during the same period, as the number of unemployed people doubled and they and other households lost income.

Moreover, states whose TANF programs were more responsive to the greater need for assistance are now cutting their TANF cash assistance programs to reduce the amount of TANF expenditures used to support unemployed parents, despite a continuing poor job market.  At least four states have cut their already-low monthly cash assistance benefits, which will push hundreds of thousands of families and children below — or further below — half of the poverty line.  Several states have also shortened lifetime time limits on TANF benefits (which already were 60 months or less) and others have cut TANF-funded support for low-income working families.

Many of these cuts — including cuts in services and supports to help poor parents find jobs — run counter to states’ longstanding approaches to welfare reform.  And cuts in benefits just when they are needed most, during a serious economic downturn, is what critics of the 1996 welfare reform act most feared.

The Misguided “States Do It” Argument for a Balanced Budget Amendment