Some 2.5 million more families nationwide would have received TANF’s direct financial assistance in 2017 if TANF had the same reach that it did upon its creation in 1996. Its cash benefits provide critical support for families with very low incomes that could not only help cover parents’ and children’s basic needs today, but also help create stability for these children to thrive in the future. These parents are also missing out on TANF work programs that could connect them to a job. State and federal policymakers need to do more to strengthen TANF and help these parents and their children afford the basics.

TANF’s monthly direct financial assistance helps parents afford necessities such as diapers, personal hygiene items, and winter coats, helping them raise their children with dignity and stability. As we noted last week, having access to a stable income also can improve children’s well-being and long-term outcomes. But few families in poverty receive TANF.

In 2017, for every 100 families with children living in poverty, only 23 families received TANF. That’s about a third of the 68 in 100 families that TANF reached in 1996. Generally, this “TANF-to-poverty ratio” (TPR) has dropped over time because TANF caseloads have fallen more than the number of families living in poverty has. This is partly due to state policy and administrative changes that have made TANF less accessible to families that need it through, for instance, strict eligibility barriers, restrictive work requirements, and time limits for assistance. In addition, TANF state programs couldn’t meet rising need for families after the Great Recession. 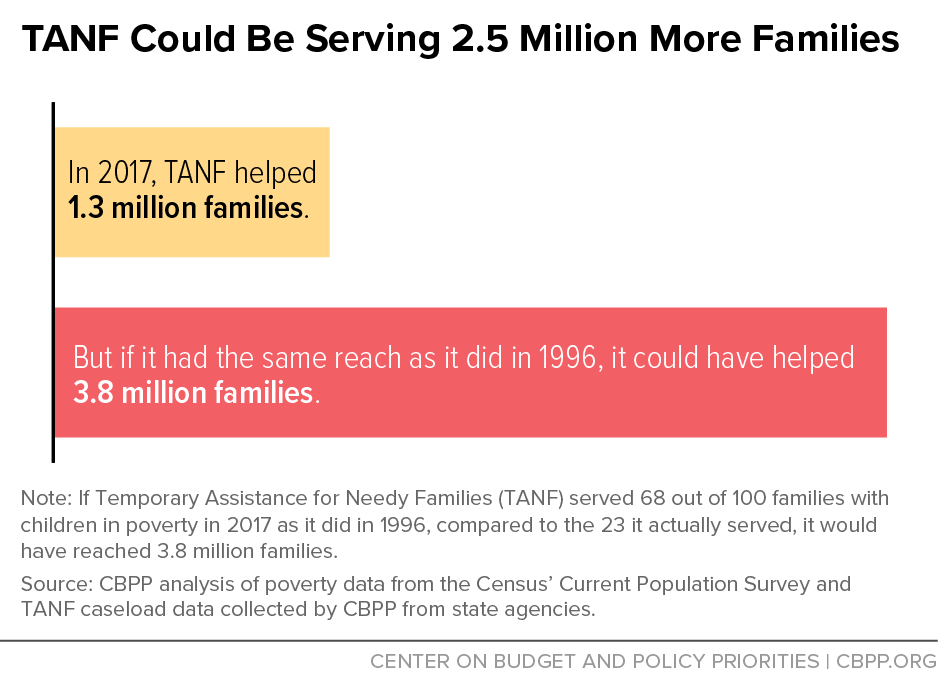 A few states have taken small steps to expand access, but state and federal policymakers need to do more. The President and Congress should create a state access measure, such as the TPR, that measures whether families in need are receiving TANF. That would hold states accountable and encourage them to provide direct financial assistance to all families that are struggling to afford the basics.

March 1, 2022
PreviousTANF at 23: States Have Boosted TANF Benefits, But There’s Room to Do More
NextTANF at 23: States Spend Only a Quarter of TANF Funds to Help Families Meet Basic Needs
Stay up to date
Receive the latest news and reports from the Center