TANF at 15, Part III: What Is TANF’s Record of Success?

Over the 15 years since President Clinton and Congress reformed welfare in 1996, states have transformed what were previously their AFDC programs, which were primarily focused on providing income support, into work-based systems that tie cash assistance to participation in work or work-related activities such as job search.

In the early years of welfare reform, the combination of a strong labor market and state policies such as work mandates and work supports (like child care assistance) significantly increased employment among participants in TANF, a block grant that replaced AFDC.  At the same time, however, many families left the welfare rolls without gaining employment, leading to a substantial increase in the number of families disconnected from both welfare and work.

Over the years, TANF has become less effective both in assisting working families affected by economic downturns and in helping very-low-income families in crisis.  The result is a weakening safety net that is falling short of its promise to help families become self-sufficient and to protect families with children who are unable to work, often because of health problems.

Employment among single mothers increased substantially during the early years of welfare reform, but many of those early gains have been lost.

.
The data suggest that a strong labor market is central to the success of a work-based assistance system.  In the early years of welfare reform, employment rates increased significantly among single mothers, including those with the lowest levels of education.  However, as the economy has weakened, a substantial portion of the early gains have been lost.

The employment rate among single mothers with less than a high school education started increasing before the creation of TANF.  It peaked in 2000 and then started to decline; by 2009 (the most recent year available) it had fallen back to 54 percent, the same level as in 1997. 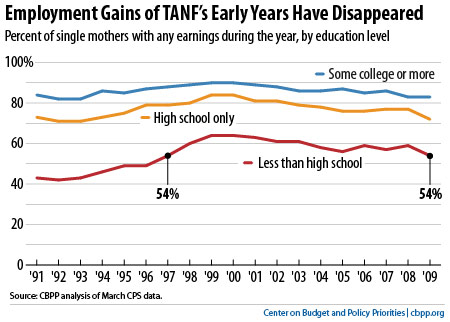 TANF caseloads, unlike AFDC caseloads, haven’t responded to changes in the number of jobless single mothers.

TANF does far less to help families escape deep poverty than AFDC did.

.
TANF benefits are too low to bring many families out of poverty, but they can help reduce the depth of poverty.  Unfortunately, TANF has proven far less effective at lifting families out of deep poverty — that is, incomes below half the poverty line — than AFDC did, mostly because fewer families receive TANF benefits than received AFDC benefits.  (The erosion in the value of TANF benefits also contributed.)

All four posts in the series:

Share
Facebook Twitter Print Email
PreviousStatement on CBO Update of Budget and Economic Outlook
NextTo Reduce the Debt, Follow the Law
Stay up to date
Receive the latest news and reports from the Center