TANF at 15, Part II:  How Have States Spent Their TANF Dollars?

The TANF block grant’s value has declined by almost 30 percent over the last 15 years.

Because the $16.6 billion annual federal TANF block grant was never adjusted for inflation, it has lost significant value over time.  States receive 28 percent less in real (inflation-adjusted) dollars than they did in 1997, a year when the unemployment rate averaged just 4.9 percent.
Image

State minimum required contributions to TANF have declined even more.  To receive their full TANF block grant, states only have to spend on TANF purposes 80 percent of the amount they spent on AFDC and related programs in 1995, and that “maintenance of effort” requirement isn’t adjusted for inflation, either.

As TANF cash assistance caseloads have dropped, so has the amount of TANF spending used for this purpose.  Federal and state TANF spending on basic assistance declined from $13.9 billion in 1997 to $9.3 billion in 2009, the most recent year available.
Image 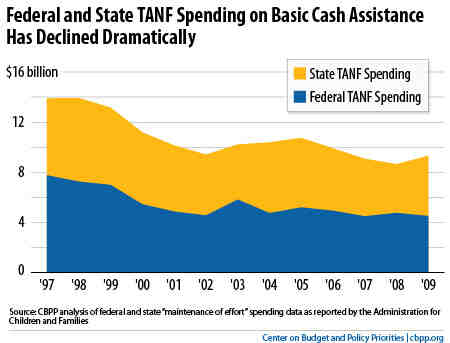 States have shifted their TANF funds to pay for a broad range of services, including some that Congress did not envision when it created the block grant.

The declines in the TANF caseload, combined with broad state flexibility in the use of federal and state TANF funds, freed up substantial resources that states have used to fund other services.   In 2009, states used just 28 percent of TANF funds to provide basic assistance, compared to 71 percent in 1997. In TANF’s early years, states used some of the freed-up funds for services directly related to welfare reform, such as increased child care assistance for recipients participating in work activities and low-income working families.  As more funds were freed up, however, states increasingly used TANF funds to cover the costs of services that the TANF statute allows but that Congress did not anticipate, such as child welfare services. The need for basic assistance has increased sharply during the recent economic downturn.  But states generally have not moved back the federal and state TANF funds they shifted to other areas of their budgets.  Instead, facing fiscal constraints, states have been reducing funding for basic assistance, as well as work activities and child care assistance.
Image

All four posts in the series:
Topics:
Family Income Support