TANF at 15, Part I: How Well Does It Provide Income Support for Poor Families?

| By LaDonna Pavetti, Ph.D.
President Clinton signed the 1996 welfare law 15 years ago today, creating the Temporary Assistance for Needy Families (TANF) block grant to replace the Aid to Families with Dependent Children (AFDC) program. We’ll present a series of posts this week that provide a closer look at how welfare reform has played out over the last 15 years. Today’s post focuses on TANF as a source of income support for poor families. TANF’s early years witnessed unprecedented declines in the number of families receiving cash assistance — and unprecedented increases in the share of single mothers working, especially those with less than a high school education. But since then, nearly all of the employment gains have disappeared, and TANF caseloads have responded only modestly to increased need during this deep and long downturn. As the following charts make clear, TANF remains an important source of income support for a small, but vulnerable group of families. However, because relatively few families receive TANF and benefits are very low, TANF plays a much more limited role in helping families escape poverty or deep poverty (i.e., income below half the poverty line) today than AFDC did.

Over the last 15 years, the national TANF caseload has declined by 60 percent, even as poverty and deep poverty have worsened. While the poverty rate among families declined in the early years of welfare reform, when the economy was booming and unemployment was extremely low, it started increasing in 2000 and now exceeds its 1996 level. The increase in deep poverty has been especially large. The number of families in deep poverty rose by 13 percent between 1996 and 2009, from 2.7 million to 3 million.
Image 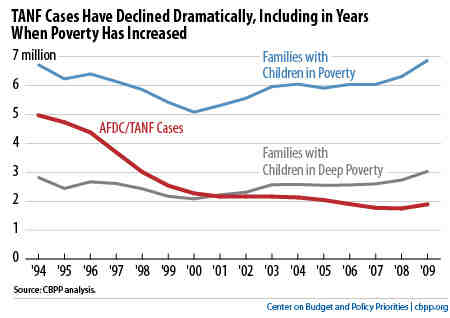 TANF cash benefits have not kept pace with inflation and are below half the poverty line in all states.

Not only are fewer needy families receiving TANF cash benefits, but benefit levels for those who are on TANF are extremely modest. In the median state in 2010, a family of three received $429 per month; in 14 states, such a family received less than $300. In all but three states, the real (inflation-adjusted) value of TANF cash benefits has declined since welfare reform’s enactment. TANF benefits are a fraction of the estimated costs of housing for a family, and housing is only one of the basic needs that a family must meet with the TANF grant. In 2010, the monthly TANF benefit level for a family of three was less than the estimated cost of a two-bedroom apartment (based on the Department of Housing and Urban Development’s “Fair Market Rent”) in all states, and less than half of the Fair Market Rent in 24 states.
Image

All four posts in the series:
Topics:
Family Income Support

Share
Facebook Twitter Print Email
PreviousIn Case You Missed It...
NextBudget Cuts No Longer “Abstract”
Stay up to date
Receive the latest news and reports from the Center