Unemployment Insurance (UI) replaces up to half of the income that workers lose when they become unemployed through no fault of their own.  That lessens the financial strain on their families while these workers look for new jobs.  In a weak economy like the current one, UI also helps sustain consumer demand, keeping a downturn from being worse and providing a boost for a recovery.

As in previous recessions, policymakers responded to the deep recession that began in December 2007 by giving additional weeks of federally funded UI benefits to workers who run out of regular, state-funded UI benefits before they can find a job.

The number of people receiving UI benefits in a given week quadrupled from about 3 million at the start of the recession to a peak of 12 million in early 2010, according to Labor Department data.  Although that number has since dropped below 7 million, jobs remain hard to find and the long-term unemployment rate is unprecedentedly high (see chart).  Two-fifths of the unemployed have been looking for work for more than 26 weeks, the most weeks that state UI programs typically provide. 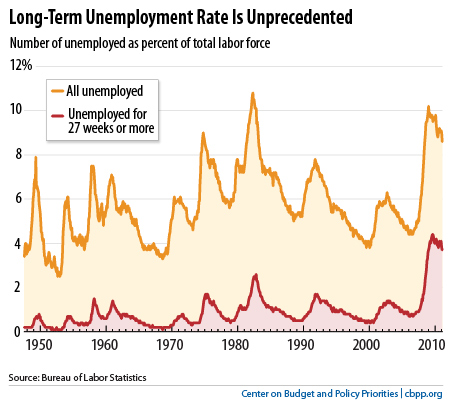 UI has done its job well thus far, such as by keeping 4.6 million people out of poverty in 2010 — 3.2 million of them as a result of the federal emergency UI benefits.  But the prolonged economic slump has placed considerable strain on the UI system:

It’s the Great Recession, Not the Great Vacation, That’s Responsible for High Unemployment

What Happens to the Unemployed if There’s No Deal on Jobless Benefits?

December 19, 2011
PreviousWhat Happens to the Unemployed if There’s No Deal on Jobless Benefits?
NextCutting Pell Grants Is Unnecessary and Unwise
Stay up to date
Receive the latest news and reports from the Center