Now that New Jersey has repealed its “family cap” law that denied more cash assistance to families that have another child while enrolled in its Temporary Assistance for Needy Families (TANF) program, the 12 remaining states with these laws in their TANF programs should follow suit. The laws not only have racist and sexist roots but constitute bad policy, denying children the resources they need to thrive. 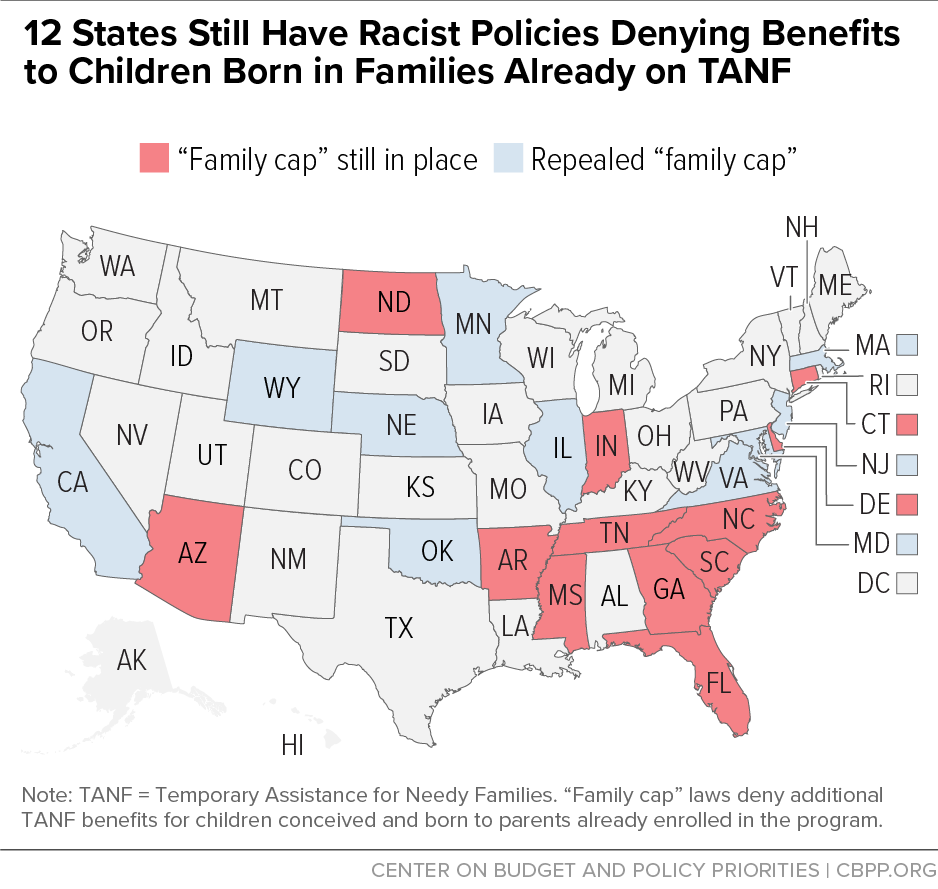 New Jersey passed the country’s first “family cap” law of recent decades in 1992. The state halted the policy in its 2019 and 2020 budgets, but it remained on the books until Governor Phil Murphy signed legislation in late September to repeal it permanently.

National and state lawmakers began pushing for family caps in the early 1990s, and House Republicans included the concept in their 1994 Contract With America. Eventually, 22 states passed family cap laws. While presented as a way to discourage births to unmarried mothers, they are rooted in stereotypes of Black women and other women of color as lazy, irresponsible individuals who have more children to collect additional benefits.

In fact, family cap policies extended a legacy of reproductive control and punishment of Black women in cash assistance programs. Many states sought to restrict access to Aid to Families with Dependent Children (AFDC), TANF’s predecessor, for women who had a child outside of marriage or lived with a man who was not their husband.

The most punitive of these “suitable home” or “man in the house” policies were in the South, where most Black people lived, and they often targeted Black families. The head of Georgia’s Department of Public Welfare, for example, said in 1951 that the state’s proposal to limit cash aid to unmarried mothers who had a child while on the program would save money “mainly by limiting aid to children of unwed Negro mothers.” (Georgia backed off this proposal due to federal opposition but enacted another law in 1952 that denied aid to unwed mothers while getting around federal rules. The state adopted a family cap in 1993.) And of the more than 6,000 families kicked off Louisiana’s program under a 1960 “suitable home” law, 95 percent were Black.

Some states sought even more drastic measures to control Black women’s reproductive decisions, such as criminal punishment or sterilization for women receiving or seeking AFDC who had “illegitimate” children.

Family caps also are just bad policy. They are based on the faulty assumption that mothers of any race decide to have a child based on receiving public assistance; research indicates they have no effect on birth rates among cash assistance families.

Moreover, family cap laws deny critical assistance to families who already have to stretch meager TANF benefits — which are at or below 60 percent of the poverty line in every state — to cover the significant expenses for an infant. New Jersey’s just-repealed law denied AFDC and then TANF assistance to 20,000 babies. Nationwide, family cap policies have blocked aid to hundreds of thousands of children. Providing more resources to low-income families with young children can have a critical impact on children’s development and future well-being, as National Academy of Sciences findings show.

Since the early 2000s, several states have repealed their family cap policies, including Virginia, which repealed its law this year. But these policies are still on the books in 12 other states, many of which provide the lowest cash assistance benefits, serve the fewest families in need, and historically limited women of color’s access to the program. During the 2021 state legislative sessions, those 12 states should repeal their family cap laws and close this dark chapter in TANF’s history for good.