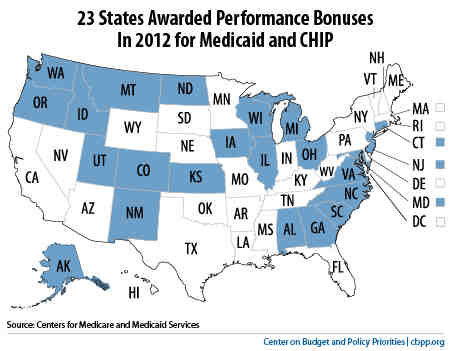 The bonuses give states a powerful incentive to improve their eligibility and enrollment processes. South Carolina, for example, first qualified for a bonus in 2011 after adopting “express lane eligibility,” meaning the state now renews some children’s eligibility for Medicaid using information it has already obtained and verified when determining the family’s eligibility for SNAP (formerly food stamps).  As a result, these families no longer have to submit the same information twice. Since South Carolina adopted this new procedure, which saves time and effort for the state as well as families, more than 175,000 children have renewed Medicaid coverage without unnecessary paperwork. States will make their health care programs even more accessible to eligible families in the next couple of years because of health reform, which requires all states to adopt several such measures by 2014 — such as using electronic data to verify beneficiaries’ continued eligibility for Medicaid and CHIP when they renew coverage.  You can find detailed information about the changes that states will make in Coordinating Human Services Programs with Health Reform Implementation: A Toolkit for State Agencies.
Related Posts:
Topics:
Health Reform, Coverage Trends, Medicaid and CHIP, TANF in the States, Health
PreviousA Bonanza for Scrooge, But a Lump of Coal for Tiny Tim
NextWhat Deeper Cuts in “Non-Defense Discretionary Funding” Would Mean for States and Localities
Stay up to date
Receive the latest news and reports from the Center