| By Stacy Dean
A piece in today’s Wall Street Journal greatly overstates the role that a state eligibility option has played in the recent growth of SNAP (the Supplemental Nutrition Assistance Program, formerly known as food stamps).  The biggest factors by far are the recession and long-term unemployment, which dramatically raised the number of low-income households who qualified and applied for help from the program. As the Congressional Budget Office (CBO) has stated, “the primary reason for the increase in the number of [SNAP] participants was the deep recession . . . and subsequent slow recovery.” More than 40 states have adopted the eligibility change in question, known as “broad-based categorical eligibility.”  Part of the 1996 welfare law, it allows states to provide food assistance to households — mostly working families and seniors — with gross incomes or assets just above federal SNAP limits who struggle to meet their food needs.  (Under federal rules, families’ gross incomes must be at or below 130 percent of the poverty line — about $24,800 a year for a three-person family — and their assets must be $2,000 or less.  Households with an elderly or disabled member must have assets of $3,250 or less.) While this option has allowed states to help more low-income people with food assistance, it hasn’t really driven program growth.  Last year, CBO estimated that repealing the option would only save 2 percent of overall SNAP costs.  Similarly, the Government Accountability Office has found that “the impact of [broad-based categorical eligibility] on SNAP participation is likely small.” The option hasn’t resulted in substantial SNAP benefits going to non-needy families, either.  Only 2 percent of SNAP households in 2011 had monthly incomes above the poverty line, after deducting expenses such as child care and high housing costs.
Image 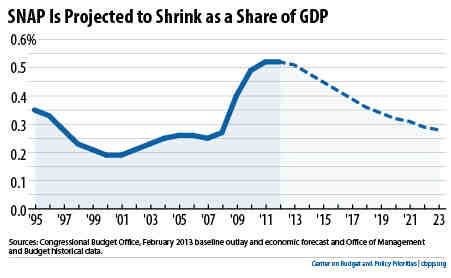 CBO projects that SNAP caseloads will shrink in coming years as the economy recovers.  It also predicts that SNAP spending will return to 1995 levels as a percent of gross domestic product (GDP) by 2019. In short, SNAP’s growth shows that the program is working as designed — to provide a temporary safety net to families struggling in a weak economy.
Related Posts:
Topics:
Federal Budget, Food Assistance