State and Local Jobs: Stuck in a Deep Hole

State and local governments had 703,000 fewer employees in June 2013 than in August 2008, according to the jobs numbers released on Friday.  That number has barely budged since January 2012 (see chart), meaning that in the last year and a half, states and localities essentially have made no progress in refilling the giant workforce hole that the recession caused.  Although the days of drastic employment cuts seem over, state and local governments aren’t replacing the teachers, firefighters, police officers, sanitation workers, and many other critical employees that they lost in recent years. 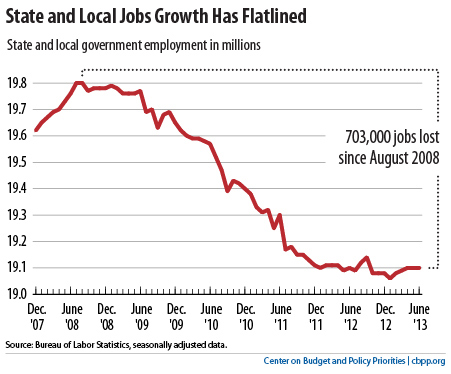 Though the jobs haven’t grown in the last 18 months, the needs have.  State populations continue to grow.  From July 2011 to July 2012 (the most recent data available), the populations of 48 states grew — for many states, by tens of thousands of new residents.

The losses in education jobs are particularly concerning.  The number of teachers, principals, school support staff, as well as college professors and administrators, has flatlined since the start of 2012, while K-12 schools have added over 200,000 additional students and colleges and universities have added 100,000 additional students.  A flat workforce combined with rising enrollments means cuts to programs, larger classrooms, and less ability to invest in promising school reforms.

The June 2013 Jobs Report in Pictures

Why Smart States Are Raising Revenues, in One Graph

June 12, 2013
PreviousThe June 2013 Jobs Report in Pictures
NextHealth Reform Rule Change Will Not Stop Important Verification
Stay up to date
Receive the latest news and reports from the Center