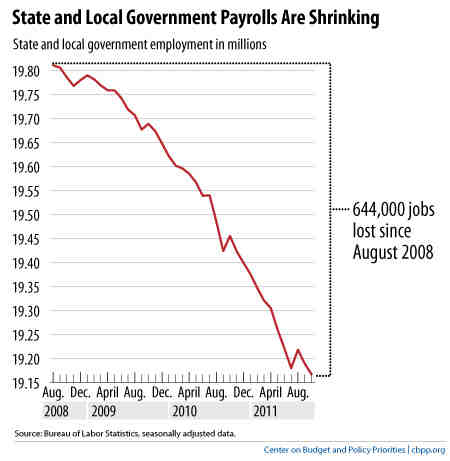 The job cuts, which states and localities are imposing to help close their budget gaps, have been widespread.  For example, since August 2008: These job losses have happened at a time when demand for the services that state and local governments provide has risen sharply.  There are, for example, at least 7.5 million more people enrolled in Medicaid than when the recession began in December 2007, mainly because so many families lost their health insurance when they lost their jobs.  And there are an estimated 261,000 more public school students than when the recession began.  The numbers of senior citizens, young children, and unemployed individuals— three groups that tend to use more public services — also have grown. Given the labor-intensive nature of most public services — teaching, policing, firefighting, and the like — it’s hard to see how governments can continue to cut so many workers without seriously harming the quality of life of the communities they serve.

Topics:
Federal Budget, State Budget and Tax, Economy
PreviousToday's Jobs Report in Pictures
NextWhy the Tax System Is Doing Less About Growing Inequality
Stay up to date
Receive the latest news and reports from the Center