The Joint Economic Committee Republican (JEC-R) study “Spend Less, Owe Less, Grow the Economy,” which we critiqued last week, has attracted the attention of Paul Krugman and Ezra Klein.  They are incredulous — as were we — at the Republican JEC claim that sharply reducing government spending and laying off government workers are critical for creating jobs in today’s economy. This is a dangerous policy prescription, and the International Monetary Fund (IMF) has effectively debunked the claim that international evidence shows it would work.  The IMF’s reading of the international evidence is that immediate sharp deficit reduction harms short-term economic growth, whether it is achieved primarily through spending cuts or tax increases. While the IMF finds that growth falls less in episodes dominated by spending cuts, that’s mainly because the monetary policy response (how much interest rates are cut) has tended to be greater in such episodes than in those dominated by tax increases.  That’s all a far cry from saying that the best thing for the U.S. economy is to cut spending immediately or that future U.S. deficit-reduction efforts should consist mostly or entirely of spending cuts. Since the United States doesn’t have sharply rising interest rates or other symptoms of an imminent debt crisis, we shouldn’t be debating which immediate deficit-reduction steps would be least destructive to the economic recovery.  Instead, we should be debating how to strengthen the recovery in the short run while putting in place a sound long-run deficit-reduction program.  The international evidence cited in the JEC-R report offers no help in that regard. The report offers Canada in the 1990s as a case study of a country that turned around a deteriorating budget situation by cutting government expenditures while enjoying stronger economic growth than it had prior to enacting those cuts.  But the JEC-R account leaves out a few important details, including the fact that, historically, Canadian economic performance has been closely tied to U.S. economic performance. The chart below reproduces data for Canada from the JEC-R report on government expenditures at all levels as a share of gross domestic product (GDP) and economic growth and adds comparable U.S. data.  Two things stand out: What I take from this is if you start with a level of expenditures significantly higher than the United States and then reduce expenditures at a time when your major trading partner is experiencing a strong economic boom (after raising taxes), you, too, can have a boom. Where’s the lesson in that for the United States in 2011?  I can’t find one.
Image 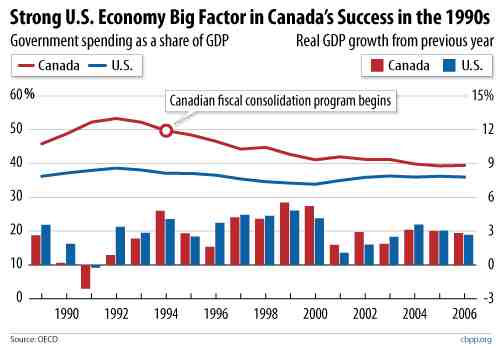