The number of SNAP (formerly food stamps) participants has fallen by more than 3 million in the last three years, new Agriculture Department data for February 2016 show — reflecting the broad pattern for SNAP that the Congressional Budget Office (CBO) and other experts had forecast.

SNAP grew significantly between 2007 and 2011 to meet rising need, as millions more people became eligible due to the Great Recession and lagging recovery; participation among the eligible also rose.  That’s consistent with SNAP’s design and purpose. 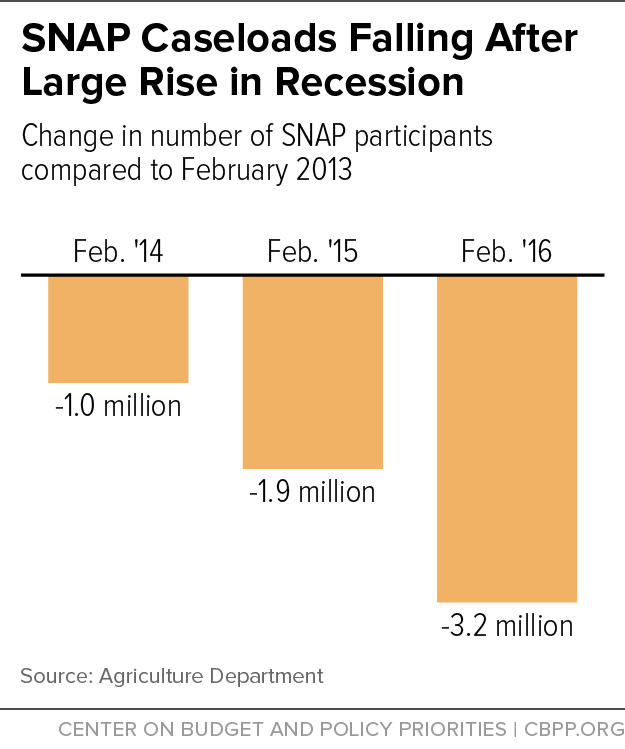 Caseload growth slowed substantially beginning in 2012 as the economy improved.  The number of participants peaked in December 2012 at 47.8 million and fell by roughly 3.2 million between February 2013 and February 2016, to 44.4 million (see graph).

While the declines largely reflect a stronger economy, the return in many areas of a three-month limit on benefits for unemployed childless adults is also having an impact.  Some states where time limits have returned have seen the steepest caseload declines.  More than half a million unemployed childless adults will lose SNAP over the course of 2016 due to the time limit.

Since fiscal year 2016 began in October, the number of SNAP participants has fallen by almost 1 million (2 percent) — the largest drop over five months since before the recession.

CBO projects that SNAP caseloads will fall by about 2 to 4 percent each year over the next decade as the economy continues improving.