School’s Open, But Funding’s Down

As a new school year begins, states are providing less funding per student to elementary and high schools than last year (after adjusting for inflation) in 21 of the 24 states for which these data are available, our new analysis finds.  (See first graph.)  These 24 states include about two-thirds of the nation’s school-age population.

Funding cuts likely are similarly widespread in the states for which these data aren’t yet available.  The 24 states we studied faced budget shortfalls this year that were no worse than the nation as a whole, on average.

In many cases, the cuts for the current fiscal year (2012) come on top of other cuts in state K-12 funding since the recession hit.  As a result, 17 of the 24 states studied are providing less funding per student than they did in 2008.  (See second graph.)  In ten of these states, funding is down more than 10 percent since 2008, and in South Carolina, Arizona, and California, it is down more than 20 percent. 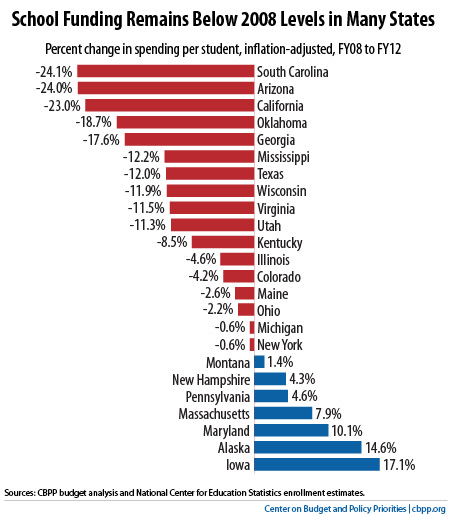 These cuts have serious consequences for students and the broader economy.

While the state funding cuts partly reflect the economic downturn, which has depressed state revenues and raised the demand for public services, they also reflect choices by state and federal policymakers.  Most states took a cuts-only approach to closing their budget shortfalls for the current fiscal year, rather than using a more balanced mix of cuts and additional revenues.  And the federal government has failed to extend the emergency education aid it gave states earlier in the downturn, which played a crucial role in limiting the funding cuts to schools across the country.