I recently described a new study finding that public programs keep tens of millions of Americans out of poverty.  The same study illustrates that after policymakers weakened certain elements of the safety net, deep poverty — that is, the share of the population with incomes below half the poverty line — rose sharply. 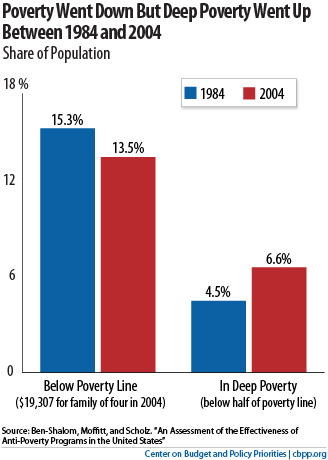 The study, which goes beyond traditional poverty data in a number of ways (such as by counting non-cash public benefits like food stamps and tax provisions like the Earned Income Tax Credit), finds that poverty fell over the past two decades but deep poverty rose.

Key to the rise in deep poverty was a weakening of the safety net for the most vulnerable.  The average value of government assistance to people with virtually no other income plummeted between 1984 and 2004, falling by 38 percent for single parents and by 41 percent for families experiencing joblessness, after adjusting for inflation.

Those losses were part of a broad shift in the safety net.  “Over time,” the study states, “we find that [public] expenditures have shifted toward the disabled and the elderly, and away from those with the lowest incomes and toward those with higher incomes.”  Put another way, “there has been a double redistribution of expenditure in the U.S. . . . from the very poor to the less poor and near poor and, across groups . . . to the elderly and disabled.”

The authors highlight the decline in cash assistance for unemployed and other extremely-low-income families with children after the 1996 welfare law created Temporary Assistance for Needy Families (TANF) to replace Aid to Families with Dependent Children (AFDC).  Food stamps also declined for the worst-off families from 1984-2004, they note.  (Access to food stamps increased for some working-poor families, however, and access has continued to improve in recent years.)

study
in 2009 that used different data but reached much the same conclusion:  although poverty rates fell from 1995 to 2005, deep poverty rose due to a weakening of the safety net, particularly TANF.  We found that, in 1995, AFDC lifted 62 percent of children who would otherwise have been below half of the poverty line out of deep poverty.  By 2005, this figure for TANF was just 21 percent.

These and other findings challenge the simplistic claim, recently restated by House Budget Committee Chairman Paul Ryan, that cutting welfare benefits and imposing strict work requirements in the 1990s made affected families better off by putting them to work.

The bottom line?  Public assistance is effective in reducing poverty, so cutting it increases poverty.  But, the safety net is accomplishing less for the most vulnerable than it used to, leaving millions more Americans in deep poverty.