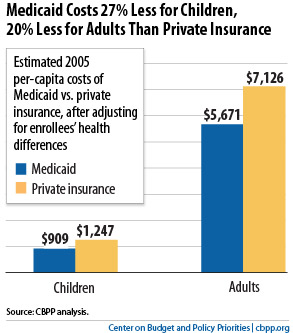 House Budget Committee Chairman Paul Ryan (R-WI) will unveil a budget tomorrow that would cut Medicaid by as much as $1 trillion over the next 10 years and convert it into a block grant. He and others will likely claim that these changes would merely rein in “out-of-control” Medicaid costs while letting states stretch their reduced federal funding and maintain coverage for people who are on Medicaid now or will need it in the future.

Don’t believe it. The inevitable result would be millions more poor Americans who are uninsured or underinsured and go without needed medical and long-term care

This means that the only ways that states could make up for Ryan’s massive Medicaid cuts would be to contribute much more of their own funds or (as is more likely) to use the greater flexibility they would receive under a block grant to roll back coverage for millions of low-income children, seniors, people with disabilities, pregnant women, and working parents.

A block grant typically lets states override most federal requirements regarding program eligibility and benefits, and block-granting Medicaid would probably eliminate the health reform law’s requirement that states expand their Medicaid programs starting in 2014 (largely at federal expense). As a result, millions of uninsured people would not gain coverage. Many states undoubtedly would have to go much further, cutting eligibility and benefits sharply and raising premiums and cost-sharing charges to levels that many current or future beneficiaries couldn’t afford. 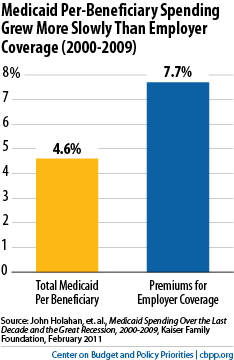 The 16 million seniors and people with disabilities now on Medicaid would likely be at the greatest risk from these cuts. They constitute just under one-quarter of Medicaid beneficiaries but account for two-thirds of all Medicaid spending because of their greater health care needs and because Medicaid is the primary funder of long-term care services and supports, including nursing home care. Any cuts in long-term care services would cause increasing harm over time as the nation ages and the need for these services continues to grow.

States would also have to institute substantial cuts in reimbursement rates for hospitals, physicians, nursing homes, pharmacies, managed care plans, and other providers that furnish care to Medicaid beneficiaries. Many of these providers would likely respond by withdrawing from the program, leaving nowhere to go for care for beneficiaries who remain on the program.

In short, the Ryan plan’s Medicaid changes would profoundly impair health care coverage for seniors, people with disabilities, and people with low incomes.