Medicaid beneficiaries have very good access to quality health care, despite claims to the contrary that House Budget Committee Chairman Paul Ryan has made to justify his proposal to convert Medicaid to a block grant.

As we’ve explained, Chairman Ryan’s budget plan would slash federal Medicaid spending and add millions to the ranks of the uninsured and underinsured.  It also rests on a flawed perception of the program.  Ryan claims that Medicaid provides poor quality care and that beneficiaries often can’t find a doctor who accepts Medicaid, thus creating a two-tiered health care system for low-income individuals and families.

A large body of research, however, has consistently demonstrated the reverse. 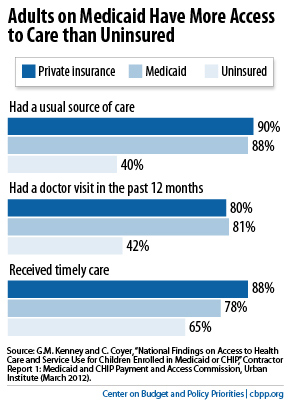 Research also shows that Medicaid improves the overall health and financial well-being of millions of low-income individual and families.  As my colleague, Judy Solomon, has noted, a landmark study of Oregon’s Medicaid program found that people on Medicaid were less likely to experience a decline in health or have unpaid medical bills and financial insecurity than people who did not have insurance.

Ironically, Chairman Ryan’s proposal to convert Medicaid into a block grant could cause his claims about the program’s shortcomings to become a reality.  His plan would cut federal Medicaid funding by 31 percent by 2023 (and by more in later years) relative to current law (not counting the effects of also repealing the Affordable Care Act’s, or ACA’s, Medicaid expansion).

Funding cuts of this magnitude would leave states little choice but to slash already-low provider payment rates — by more than 30 percent, the Urban Institute has estimated — and thus make it far more likely that doctors would be unavailable to serve Medicaid patients.  Moreover, the Urban Institute also projected that a similar block grant proposal in Chairman Ryan’s budget last year would have resulted in states cutting Medicaid enrollment by between 14.3 million and 20.5 million people by 2022.  (This is on top of the effects of repealing the ACA’s Medicaid expansion, which would deny access to care to 17 million people who would otherwise gain coverage if all states adopt the expansion).

Millions more low-income Americans would be uninsured, lack access to care, and thus be made worse off under the Ryan budget.  That’s a two-tiered health care system that we should worry about.

Does Medicaid Matter? New Study Shows How Much