House Budget Committee Chairman Paul Ryan highlighted the Earned Income Tax Credit (EITC) today as one of the most effective anti-poverty programs and joined growing bipartisan calls to expand it for childless adults (including non-custodial parents), the lone group that the federal tax system taxes into poverty.  We applaud this step, though we encourage him to reconsider some of his proposals to offset the cost — which would hit vulnerable families — and his opposition to a much-needed increase in the minimum wage. Ryan proposes lowering the eligibility age for the EITC for workers not raising minor children from 25 to 21, doubling the maximum credit to about $1,000, and phasing in the credit more quickly as a worker’s income rises. Ryan’s poverty proposal makes a strong, and broadly shared, case for these changes: 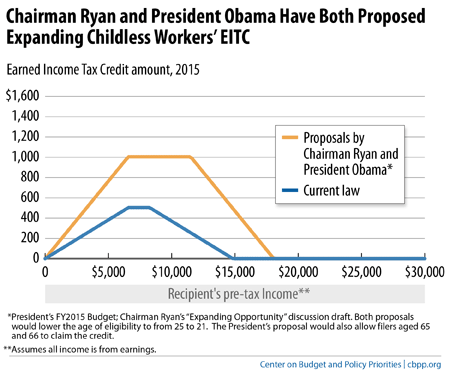 Unfortunately, Ryan’s proposal has two serious flaws. First, he would pay for it in part by eliminating the refundable part of the Child Tax Credit for several million children in low-income immigrant working families, including citizen children and “Dreamers,” thereby pushing many of them into — or deeper into — poverty. He would also eliminate the Social Services Block Grant, a flexible funding source that helps states meet the specialized needs of their most vulnerable populations, primarily low- and moderate-income children and people who are elderly or disabled.  (This program provides the kind of services and state flexibility that Ryan says we need more of when he promotes other parts of his plan that would enable states to cut food stamps and rental assistance and shift the resources to services.) Also among the programs that Ryan would end is one that provides fresh fruits and vegetables primarily to children in schools in low-income areas.  By contrast, the President would pay for his EITC expansion by closing tax loopholes for wealthy taxpayers. Second, Ryan presents the proposal as an alternative to raising the minimum wage, which has lost 22 percent of its value since the late 1960s due to inflation.  As we have explained, it takes both a strong EITC and an adequate minimum wage to ensure that work “pays” adequately for those in low-wage jobs.  The two policies should be seen as complements, not substitutes. Related Posts:
Topics:
Federal Tax, Tax Credits for Individuals and Families, Poverty and Inequality, Immigration

A Bipartisan Call to Boost the EITC and Cut Poverty

EITC Could Be a Pathway to Opportunity for Young Men

July 24, 2013
PreviousRyan’s Rhetoric Doesn’t Match His Proposal’s Reality
NextGreenstein on Ryan’s “Opportunity Grant”
Stay up to date
Receive the latest news and reports from the Center