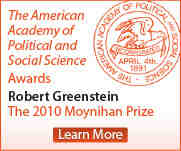 Last night, the Center’s executive director, Robert Greenstein, received the 2010 Daniel Patrick Moynihan Prize, from the American Academy of Political and Social Science “to honor those whose careers in the academic or public arena have been dedicated to the use of social science research to improve public policy.” Daniel Patrick Moynihan was U.S. Senator from New York, U.S. Ambassador to the United Nations, official in four presidential administrations, Harvard professor, prolific author, and leading public intellectual on a wide range of domestic and international issues. In his acceptance
speech
, Greenstein spoke about the award and the challenges ahead:

"[I] find it quite daunting to receive an award in the name of Daniel Patrick Moynihan, who was such a towering figure, an inspiration for those of us who labor in his intellectual shadow. It is also somewhat daunting to find myself in the company of the previous winners of this award — Alice Rivlin and David Ellwood… "[A]s I accept this award tonight and look out on this distinguished audience of scholars and practitioners, I can’t help but say something you already know — that we will need academic research and analysis to guide policy decisions to an even greater degree in the future than we have in the past. "Our long-term fiscal situation is unsustainable. Wrenching changes are inescapable. And the specific decisions that are made on what those changes are, whom they affect, and how, will have a large bearing on who and what we will become as a people and as a society. "From a fiscal standpoint, our greatest need is to slow the rate of growth of health care costs. In the landmark health reform law, policymakers enacted most of what we know how to do now to restrain health care costs without compromising health care quality — and without rationing care largely by income. To help us find better ways to slow health cost growth, we will need to depend heavily on research, pilot projects, demonstrations, and the like. "We’ll also need more research and analysis, on both the spending and tax sides of the budget, on what works and what does not — and for ideas for how to deliver services in new ways that are more economical and efficient. "There is, of course, no assurance that policymakers will pay attention to the serious research and good ideas that emerge from people such as you, and from think tanks, universities, and other institutions across the country. I can only say that urging policymakers to pay attention to them is part of our mission at the Center on Budget."

Update, June 8: The American Academy of Political and Social Science has posted the remarks of David Ellwood as he introduced Robert Greenstein as "a true American hero," and presented him with the Moynihan Award.
Topics:
Federal Budget, Budget Outlook, Health Reform, Health
PreviousOn Estate Tax, Lawmakers Partying Like It’s 2001
NextIn case you missed it...
Stay up to date
Receive the latest news and reports from the Center