As I noted yesterday, Republican leaders in both the Senate and the House want to extend the lucrative estate-tax rules that policymakers included in compromise tax-cut legislation at the end of 2010 — but not the tax-credit improvements for working-poor and near-poor families and students that were also in the legislation.  Yesterday, we focused on what the end of these tax credit improvements would mean for lower-income Americans.  Here, we look more closely at what the estate-tax extension would mean for the nation’s wealthiest estates. Compared to President Obama’s proposal to return to the already-generous 2009 estate tax rates, the Senate and House Republican proposals would provide further tax breaks averaging over $1 million per estate to the heirs of the biggest 0.3 percent of estates. As we explain in a new analysis, the proposals each would:
Image 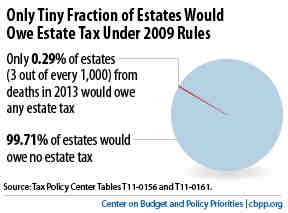 What’s more, as the paper explains, the small number of estates that would benefit from extending the 2010 estate-tax break would not owe particularly high taxes even under the 2009 rules.  Under the 2009 rules, taxable estates would pay an average effective tax rate of 19.1 percent in 2013, far below the official statutory rate of 45 percent, TPC estimates. And as I explained yesterday, the Senate and House Republican leadership proposals would end provisions of the same 2010 legislation that extended improvements in tax credits for millions of low- and moderate-income working families and substantial numbers of college students. Providing more than $100 billion in tax windfalls to the largest three out of 1,000 estates would be hard to justify in the best of times.  It would be particularly egregious in the current fiscal climate.  For policymakers to propose this lavish tax windfall to the wealthiest Americans while they would let tax credits for millions of low- and middle-income working families with children expire is all the more remarkable. Click here to read the full paper.
Related Posts:
Topics:
Federal Tax, Personal Taxes, Business Taxes, Tax Credits for Individuals and Families
PreviousScaring Seniors on Capital Gains
NextNew Toomey Plan Not a Useful Step Toward a Compromise Deficit Agreement
Stay up to date
Receive the latest news and reports from the Center