The Wall Street Journal opposes the idea of reducing the value of itemized deductions for high-income taxpayers to help reduce deficits, but it ignores a basic reality:  these deductions are economically inefficient.  Reforming them would improve efficiency as well as raise much-needed revenue, so that should be front and center in deficit-reduction negotiations. 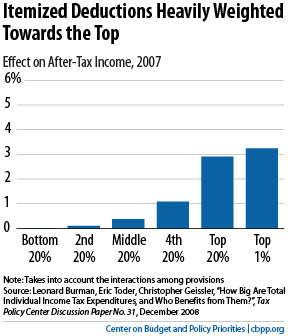 The tax code includes various deductions and exclusions designed to encourage socially valued activities such as owning a home, pursuing education, saving for retirement, or contributing to charity.   Their general design, however, is “upside down.” They provide the largest subsidies to the people with the highest incomes (see graph), even though these are the people least likely to need a financial incentive to do whatever the subsidy is designed to encourage, and even though there’s no evidence that the country is better off if a rich person pursues the activity than if a middle-class person does.

Take the mortgage interest deduction as an example:

It’s both inefficient and inequitable for taxpayers to pay 15 percent of the middle-class family’s mortgage interest but one-third of the investment banker’s.

Both the bipartisan Bowles-Simpson commission and the bipartisan Rivlin-Domenici commission recognized this glaring design flaw and advanced reform proposals that improve efficiency and raise much-needed revenue.  So has the President.

Budget negotiators would be well served to put these proposals in the middle of the negotiating table.