Reflecting on Full Employment, 50 Years After the March on Washington

| By CBPP
As the nation prepared to celebrate the 50th anniversary of the historic March on Washington this week, CBPP Senior Fellow Jared Bernstein reflected on the job market’s critical role in advancing economic progress among African-Americans. Here’s an excerpt from his recent blog post:

Remember, it was called the “March on Washington for Jobs and Freedom.” … And when he was taken from us, Dr. King was leading the “Poor People’s Campaign,” organized around the need for jobs, health care, and housing.

The last time this economy was operating with truly tight labor markets, back in the latter 1990s, I was quite struck by the gains made by African-Americans, both in absolute terms and relative to whites.  Here’s just a small table, the work of a few minutes, which makes the case on a number of key economic variables. 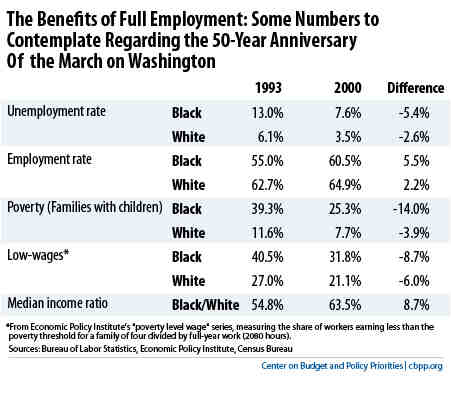 These statistics focus on the relative trends, but it is of course disarmingly clear that the levels in the table reveal great racial disparities.  Even with the noted gains, black family poverty was many multiples of the rate for whites.  Even at its peak, the income ratio was below two-thirds.

But you’ll never get to the levels you desire without the trends moving in the right directions, and for that to happen, we need to get back to full employment.

Share
Facebook Twitter Print Email
PreviousIn Case You Missed It...
NextOne Goal of the March on Washington Gets a Bit Closer
Stay up to date
Receive the latest news and reports from the Center