July’s employment report included more bad news from states and localities:  job losses are continuing.  Since August 2008, state and local governments have slashed 611,000 positions, and the cuts have been getting worse — 340,000 of those jobs were lost in the last 12 months.  July was the ninth consecutive month, and the 29th out of the last 35, in which total state and local employment shrank.
Image 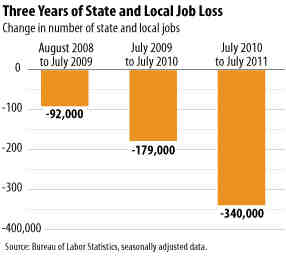 The news comes on top of many states’ recent enactment of deep spending cuts for the new fiscal year that will lead to even more job losses for public employees, even as the recession and its aftermath continue to place increased pressure on public services.  Economic recovery and quality of life will both suffer as a result. The job cuts have been widespread.  Since state and local employment peaked in August 2008, payrolls have shrunk by 611,000 jobs:
Topics:
State Budget and Tax, Economy
PreviousChairman Ryan Can’t Have It Both Ways on Taxes and the Debt Limit Deal
NextThe Flawed “Evidence” for the Tax-Flight Myth
Stay up to date
Receive the latest news and reports from the Center