Poverty remained above pre-recession levels last year in 47 states plus the District of Columbia, our analysis of Census data issued this morning shows (see chart).  In some states, the increase was substantial — in Arizona, California, Florida, Georgia, and Nevada, poverty rates were four to five percentage points higher in 2013 than in 2007.  The stubbornness of high poverty rates in the wake of the Great Recession underscores the need for states to do more to help working families make ends meet. Poverty rates in the states not still above pre-recession levels, Alaska and the Dakotas, weren’t statistically different from 2007. Unequal wage growth and rising income inequality have played key roles in preventing more substantial improvements in poverty.  For workers earning low pay, wages are right where they were 40 years ago after adjusting for inflation, according to the Economic Policy Institute.  And since the recession’s official end in 2009, most workers’ wages have fallen, while workers at the top have seen some growth. States have tools to help to address low wages and rising income inequality.  They can create or improve state earned income tax credits (EITCs), which promote work and reduce poverty and can improve low-income children’s chances of success both in school and, later, in the workforce.  States can also raise their minimum wage — the federal minimum wage is 22 percent below its peak value in 1968, after adjusting for inflation — and index it to inflation.  Improvements in these two areas are complementary for reasons we explain here, reaching a broader population than the EITC or minimum wage alone and keeping many more families out of poverty.
Image 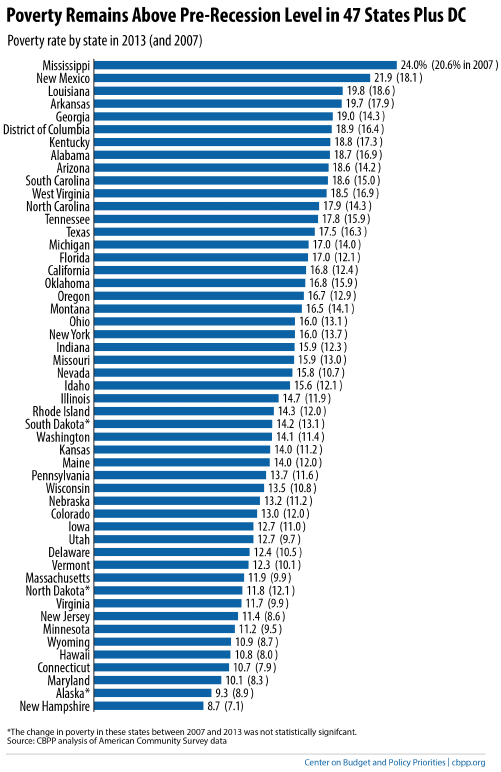