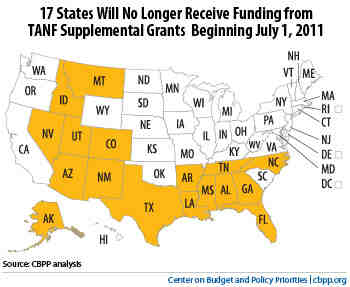 In a continued unraveling of Congress’ deal with the states when it enacted the 1996 welfare reform law, federal Supplemental Grants provided every year since 1996 to 17 states to augment their Temporary Assistance for Needy Families (TANF) block grant will expire this Friday, our new report explains.  These states include some of the poorest in the nation, with child poverty rates averaging 22 percent (see map).  Several have also been hit especially hard by the economic downturn; nine have unemployment rates above the 9.1 percent national average. Here’s the background: unlike the AFDC program that it replaced, the TANF block grant gives each state a flat amount of federal funding each year that does not rise when the economy weakens, unemployment rises, and more families need help.  Moreover, since each state’s TANF funding level is based on how much it spent under AFDC, poor states get less than half as much funding per poor child as other states (see graph).
Image 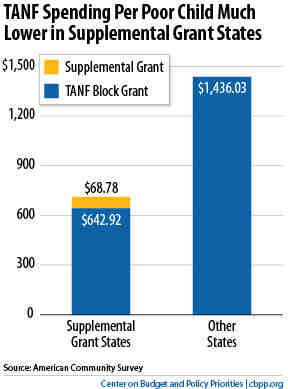 To help address these problems, the framers of the 1996 welfare law created Supplemental Grants to provide extra funding to states that TANF’s funding formula places at a disadvantage, as well as a Contingency Fund to provide additional funds to states hit hard in bad economic times. Neither of these additional funding streams will be available to states for the rest of fiscal year 2011, which runs through September 30.   The Contingency Fund was exhausted in December 2010.  The Supplemental Grants are now expiring as well.  (In a related matter, the temporary TANF Emergency Fund, which the 2009 Recovery Act created to help states respond to recession-related increases in need, also expired last September 30.) This means that for the first time in TANF’s history, Congress is now providing no additional TANF funding to help states respond to the increase in need from a downturn or to address the funding inequities under the TANF block grant.  And, for the first time since AFDC’s creation in the 1930s, the federal government is offering no additional funding to states to help cover the higher need for AFDC- or TANF-funded help to poor families from an economic downturn. By letting the Supplemental Grants expire, Congress risks weakening states’ ability to assist struggling families that have nowhere else to turn.  Congress also risks compromising states’ ability to maintain a strong work focus in their TANF programs as states consider cuts in work supports and work-related services to reduce costs.  This isn’t what policymakers intended when they enacted welfare reform in 1996.
Topics:
Federal TANF Policy, Family Income Support
PreviousIn Case You Missed It...
NextOn Deficit Reduction: Protect Low-Income Americans and Don’t Increase Poverty
Stay up to date
Receive the latest news and reports from the Center