Now It’s Up to the Senate on Climate Policy

| By Chad Stone
Climate legislation is set to reappear on the national policy stage next week with Senators Kerry, Graham, and Lieberman unveiling a major bill.  In crafting climate legislation, the Senate should include two fundamental features of last year’s House-passed bill:  “put a price on carbon” to create the incentives needed to reduce greenhouse-gas emissions, and protect vulnerable consumers from the resulting increase in energy-related prices. As one of our two new backgrounders on climate policy explains, putting a price on carbon — by capping emissions, imposing a carbon tax, or some combination of the two (as next week’s proposal is expected to do) — is a market-based approach that encourages families and businesses to find the most cost-effective ways to reduce their carbon footprints. We may need to take further steps to raise awareness of the benefits of energy efficiency investments and spur the basic research necessary to make the technological transition to a clean-energy economy.  But the key to tapping the ingenuity of American businesses and households is to give them the right market incentives. The alternative would likely be much more expensive — whether it’s trying to reduce emissions through the blunt instrument of “command-and-control” government regulation or, worse, doing nothing and letting the economic and environmental risks from global warming continue to grow. While higher energy-related prices are necessary to reduce emissions, they’re going to affect consumers — especially those with low incomes, who spend a larger share of their budgets on necessities like energy than do better-off consumers. These vulnerable households will face higher prices for home energy and gasoline, of course.  But many people don’t recognize that a substantial part of the impact on consumers’ budgets (see chart) will come indirectly, through higher prices for food and the myriad of other products made with or transported by fossil-fuel energy.
Image 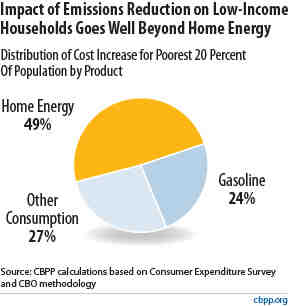 That’s why climate legislation should include meaningful consumer relief for low-income households.  The House-passed bill, for example, fully offsets the average increased costs for the households in the poorest fifth of the population, largely through a robust program to provide them with direct cash assistance.  (Other households would get some help with their utility and heating oil bills.)  And the bill relies on a second important feature of market-based climate policies — their ability to raise revenue — to pay for consumer relief without adding to the budget deficit. The House bill shows that well-designed climate legislation can fight global warming effectively without making poor people poorer or driving more people into poverty.   It’s now up to the Senate to live up to this standard.
Topics:
Climate Change