The budget deal from House and Senate leaders would substantially boost overall non-defense appropriations that fund such key national needs as education, job training, and infrastructure.  Such funding would, however, remain below its level of eight years ago in inflation-adjusted terms — a sign of how much this part of the budget has been squeezed in recent years.

Today’s agreement would raise the limits on defense and non-defense appropriations in 2018 and 2019 that were set by the 2011 Budget Control Act and subsequently reduced further by the sequestration process.  The agreement would follow three bipartisan deals of recent years raising those caps, each of which reflected the reality that post-sequestration appropriations caps were simply too low to meet national needs.  The new agreement would provide the largest increase in the series, raising the non-defense cap by $63 billion in 2018 and $68 billion in 2019, compared to the sequestration levels. 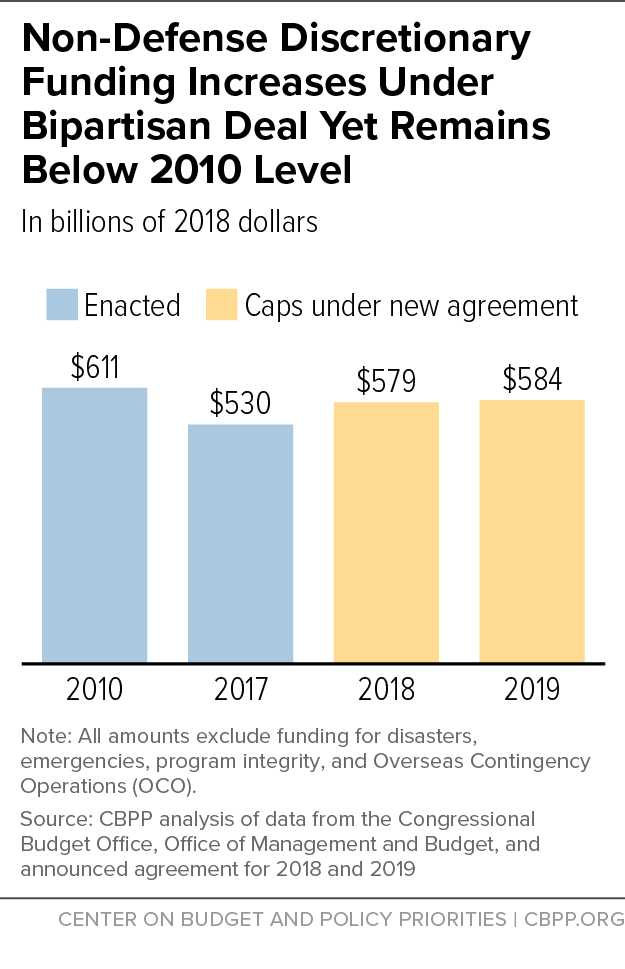 These increases, however, would not expand appropriated programs beyond historical levels.  Indeed, they would fall short of the levels needed just to return funding to where it was eight years ago, before the multiple rounds of budget cutting of recent years (see chart).  Adjusted for inflation, the new cap on non-defense appropriations in 2018 would still be 5.3 percent below the comparable 2010 level.  And if adjusted for population growth as well as inflation, it would be 11.0 percent below the 2010 level.

A common way to consider multi-year spending trends is to measure outlays as a percentage of gross domestic product (GDP) — that is, relative to the size of the economy.  Before this budget agreement, non-defense appropriations were projected to equal 3.1 percent of GDP in 2018 — tying for the lowest percentage on record, with data going back to 1962.  The agreement will raise the percentage somewhat, but it will remain well below its long-term average (since 1962) of 3.8 percent.

As we’ve discussed here, austerity in non-defense appropriations has left funding well short of what’s required to address important needs.  The new agreement will be important to alleviate some of the shortages.  Fundamentally, though, it’s essentially reversing many of the recent cuts and moving funding closer to where it was in the not-so-distant past to help the federal government better serve the public; invest in science, education, and infrastructure; and help meet the needs of vulnerable households.

January 17, 2018
PreviousTrump Plan to Condition Rental Assistance on Work Will Hurt Families, Not Support Work
NextPolicymakers Should Craft Reinsurance Proposals to Lower Premiums, Help More People
Stay up to date
Receive the latest news and reports from the Center