No Fizz in Upcoming COLA

Tomorrow, new figures from the Labor Department are expected to confirm that for the second year in a row, Social Security recipients will receive no cost-of-living adjustment (COLA) in January. Nevertheless, people who have been receiving Social Security for a few years are still ahead of the inflation game. Here’s why:

COLAs in Social Security and several other federal programs — such as Supplemental Security Income (SSI), Railroad Retirement, veterans’ compensation and pensions, and federal civil-service and military retirement — are based on the Consumer Price Index for Urban Wage and Clerical Workers (CPI-W) in the third calendar quarter of the previous year. In July-September 2008, the CPI-W reached its highest level ever. As a result, Social Security and other beneficiaries received a 5.8 percent increase in benefits in January 2009 — the biggest increase in over a quarter-century.

Led by a steep decline in energy prices, the CPI actually fell after summer 2008. Only now is it inching toward its previous peak (see graph). Because the CPI still lies below its July-September 2008 record, there was no COLA in January 2010, and — pending Friday’s announcement — inflation-watchers expect no COLA in January 2011 either. The Social Security trustees expect automatic COLAs to resume in January 2012. 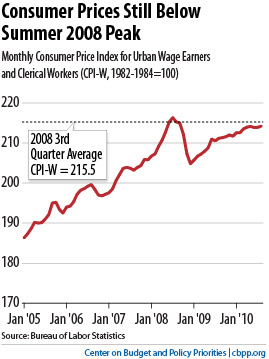 By law, Social Security and other programs can’t reduce benefits when prices fall. If they did, benefits would have dropped in 2010 — tracking the 2.1 percent fall in the CPI-W between the summers of 2008 and 2009. But beneficiaries were shielded from that result.

So don’t let the lack of a benefit increase next year fool you. Social Security is still doing its job of protecting beneficiaries against the effects of inflation.