The Kaiser Commission on Medicaid and the Uninsured’s new annual survey of state eligibility policies in Medicaid and CHIP shows that income eligibility levels for working parents have continued to stagnate.  The median income level fell slightly, from 63 to 61 percent of the poverty line — $11,645 for a family of three.  For non-working parents, income eligibility remained at a dismal 37 percent of the poverty line — $7,063 a year for a family of three. 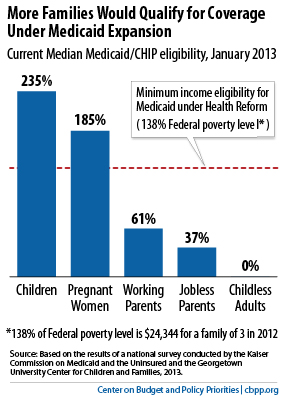 The median income level marks the halfway point in state income eligibility levels — where half the states fall above and half fall below.  As states consider whether to expand Medicaid, it’s important to understand where some of the states rejecting or leaning against expansion stand.  In Louisiana, for example, a parent would have to earn less than $4,582 a year to qualify; in Texas, $4,773; and in Idaho, $7,063.  Alabama, Florida, Georgia, Mississippi, and Utah also fall below the median.  In most of those states, childless adults are not eligible for Medicaid at all or only have limited coverage under waiver programs.

Some governors have balked at the expansion because it would add large numbers of state residents to their Medicaid rolls.  For example, Florida Governor Rick Scott’s office said that the number of people on Medicaid in Florida would nearly double if the state expands (from about 3.3 million today to more than 6 million). But large numbers of parents and childless adults would become eligible in Florida — where over half of poor adults are uninsured — because the state covers so few adults today.  Expanding Medicaid would change that and provide a pathway to health coverage for poor, uninsured working parents and other adults.

Support for Medicaid Expansion Growing Among Governors of Both Parties