| By Chad Stone
“You’re gonna need a bigger boat,” Roy Scheider’s character announces in the movie Jaws when he sees the size of the shark they’re hunting.  Today’s Commerce Department report on the economy is just the latest evidence that we’re going to need a bigger stimulus to address the Jaws-sized jobs deficit the nation faces. The report shows that real (inflation-adjusted) gross domestic product (GDP) increased at an annual rate of 2.0 percent in the third quarter.  That’s about what was expected and was slightly better than the second quarter’s 1.7 percent growth.  As the chart below shows, the U.S. economy has expanded for five straight quarters.
Image 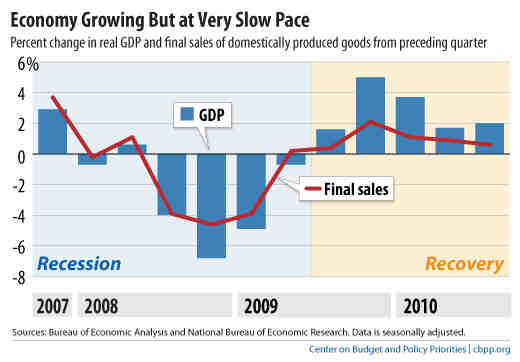 But the recovery is losing steam, and final sales of domestically produced goods and services (that is, the part of GDP left over after subtracting inventory accumulation by businesses) are growing even more slowly than overall GDP. It would be good news if businesses were building up their inventories in anticipation of future sales growth.  But what we are seeing now looks more like unsold goods piling up on the shelves in the face of weaker-than-expected consumer demand. Policymakers are staring into the maw of a gaping jobs deficit with an underpowered economy, but unlike the shark hunters in Jaws, there is something they can do about it.  The chart below estimates how the 2009 Recovery Act, supported by actions by the Federal Reserve to keep interest rates low, helped turn the economy around faster than if no action had been taken.
Image

It’s time for Congress and the Fed to take the bold actions necessary to give the economy a further boost.  Congress can start by making sure that emergency unemployment insurance benefits do not expire at the end of November and by renewing the TANF Emergency Fund, which has helped create jobs for nearly 250,000 Americans.
Topics:
Economy

Share
Facebook Twitter Print Email
PreviousHealth Reform Not to Blame for This Year’s Premium Increases
NextIn Case You Missed It...
Stay up to date
Receive the latest news and reports from the Center