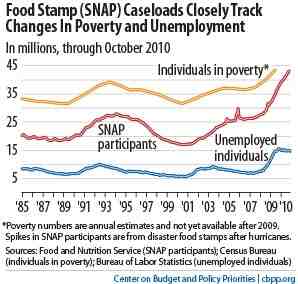 Some 43 million Americans are receiving help through the Supplemental Nutrition Assistance Program (SNAP, formerly known as food stamps) to afford a nutritionally adequate diet, according to the latest Agriculture Department figures.  That works out to 1 in 7 Americans — and 1 in every 4 children.  And the need for SNAP isn’t likely to decline significantly anytime soon, given the nation’s large jobs deficit. As the graph shows, SNAP enrollment tends to rise and fall in tandem with changes in poverty and unemployment.  That’s what SNAP is designed to do:  respond quickly and effectively as people lose jobs and income due to an economic downturn, then contract as the economy recovers.  Since the recession began in December 2007, SNAP participation has increased by 15.6 million people, or 57 percent. Unfortunately, unemployment has been slow to recover after recent recessions, and poverty even slower — and the current recovery appears to be following that pattern.  After the recessions of the early 1980s, early 1990s, and 2001, poverty didn’t even begin falling until a year after unemployment began to fall. This means that many families likely will need access to a safety net, including SNAP, for many years to come.
Topics:
Food Assistance, Poverty and Inequality, Economy
PreviousMedicaid Costs Less Than Private Insurance
NextCorporations Won’t Flee Illinois’ Corporate Tax Hike
Stay up to date
Receive the latest news and reports from the Center