State lawmakers nationwide can learn from the Oregon House Revenue Committee’s efforts to understand and account for the effects of racism on the state’s revenue-raising system. In February the committee held a hearing, convened by the legislature’s Black, Indigenous and People of Color (BIPOC) Caucus, examining Oregon tax policy through a racial equity lens, the ways in which the state’s revenue system harms communities of color, and what can be done to repair that harm.

State fiscal policy choices about how much revenue to raise and from whom to collect it are critical decisions that can worsen, preserve, or reduce racial and economic inequities. States don’t collect taxes based on people’s race, but historical racism and ongoing forms of discrimination and bias shape the incomes people have and the property they own. In short, tax policy can’t be race neutral because of the country’s legacy of racism.

Oregon and other states can begin to reverse this legacy by asking wealthy households and businesses, which are much likelier to be white or white-owned, to pay their fair share for public investments, and by raising enough revenue to undo a long history of under-investment in people of color and their communities, especially those where most of the residents are Black, Latinx, or American Indian. These long overdue investments will remain necessary for many years after new federal aid that the American Rescue Plan Act provides runs out. 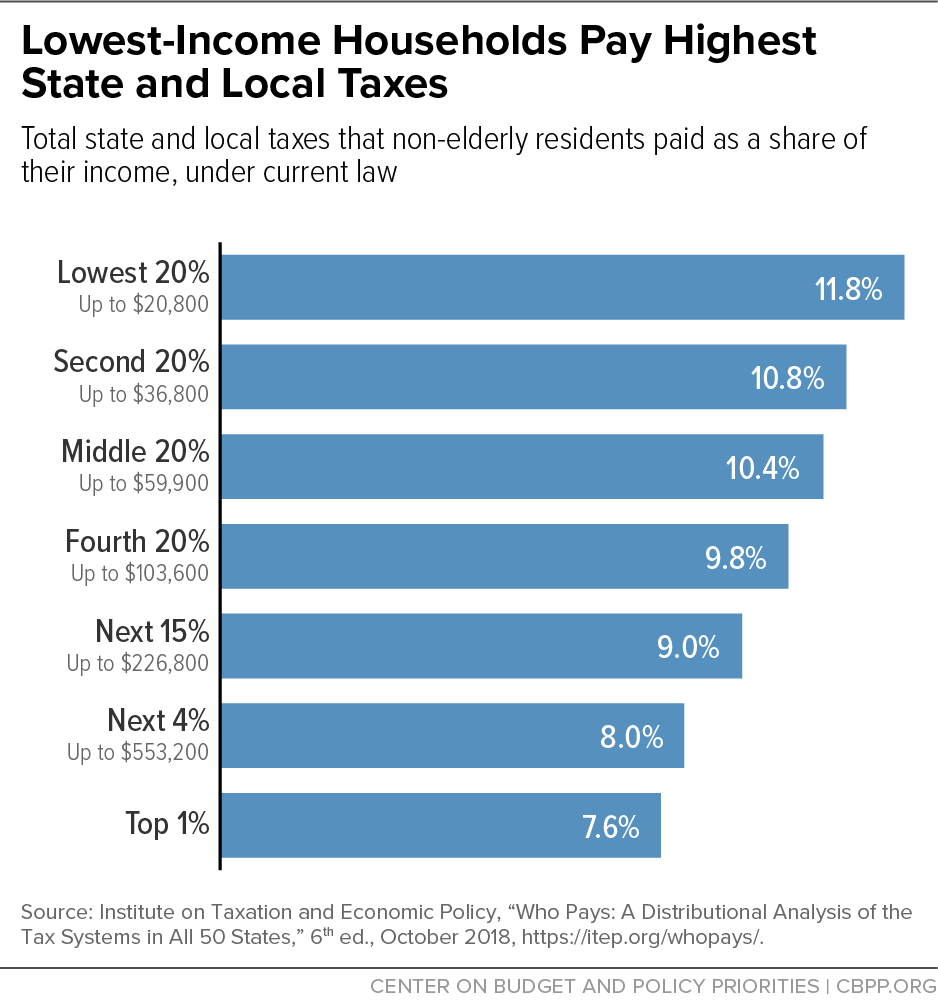 As with many other states, Oregon’s tax structure is upside-down: it asks people with lower incomes to pay more as a share of their incomes. Those with the lowest incomes pay 12.8 percent of their income in state and local taxes on average, while the top 1 percent pay 8.2 percent, according to the Institute on Taxation and Economic Policy. Nationally, the average effective state and local tax rate is 11.8 percent for people with the lowest incomes but only 7.6 percent for the wealthiest. That means people with the lowest incomes — who are more likely to be people of color in Oregon and elsewhere — are shouldering a heavier load for roads, schools, health care, and other investments that contribute to broadly shared prosperity, as a share of their income.

Oregon could make its tax code more equitable in part by eliminating or scaling back tax deductions, preferential tax rates, and other tax expenditures that favor wealthier residents. For example, Oregonians of color are less likely to own homes and to benefit from the state’s mortgage interest deduction due to their lower income and wealth and the nation’s history of racist housing policies, including “redlining.”

Compounding the problem are tight property tax limits Oregon adopted in the 1990s. These limits have constrained the natural growth of property tax revenue, reducing taxes especially for the owners of homes whose values have grown most rapidly in recent decades and generally delivering the biggest dollar benefits to the highest-value homes, with profound consequences for the continued racial stratification of wealth. The limits also have sharply reduced local government revenues, constricting the ability of cities, counties, and school districts to provide for all their citizens and undermining efforts to reduce the barriers to opportunity facing people of color. They have also led local governments to rely more on user fees, for example higher fees for community college tuition and extracurricular school activities, which hit low-income households harder and can discourage enrollment and participation.

Equitable tax policies, in contrast, help connect people of all races, ethnicities, genders, incomes, and backgrounds to the resources and opportunities they need to thrive. This moment — with COVID-related hardship still widespread and historic levels of federal aid for states and local governments on the way — presents an opportunity for state and local lawmakers to make transformative investments that can help build antiracist, equitable, and inclusive communities. They can start by following Oregon’s lead and examining what their tax code says — and what they want it to say — about their state’s values.

March 24, 2022
PreviousIn Case You Missed It...
NextLatest Proposals Show Need for Rescue Plan’s State Tax Cut Restriction
Stay up to date
Receive the latest news and reports from the Center