Today’s Rockefeller Institute report has some positive news: state tax collections in the third quarter of 2010 were higher than in the third quarter of 2009. However, the overall state budget picture is still bleak, as revenues are 12 percent lower than they were before the recession, adjusted for inflation. The report concludes that “the immediate outlook is for revenue collections significantly below prerecession levels, and growing spending pressures. The overall picture remains: States will face continued, significant budget challenges in fiscal 2011 and beyond.”
Image 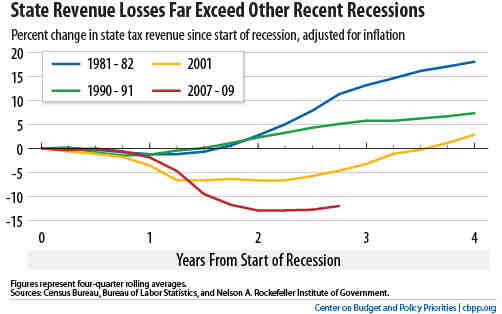 At the same time that revenues have declined, the cost of providing services remains high, due both to rising overall population and a growing population in need. Medicaid enrollment jumped by 3.8 million just between December 2008 and December 2009, for example, as families lost jobs, income, and access to affordable job-based coverage. Federal fiscal aid to states is expiring, and many state tax increases enacted in 2008 and 2009 are scheduled to expire soon. Already, states are projecting $112 billion in shortfalls for fiscal year 2012, as we reported in October, and we expect that number to grow. All this means that states will need to take a balanced approach that includes revenue raisers when writing next year’s budgets.
Topics:
State Budget and Tax, Economy
PreviousCBO: Up to 3.6 Million People Owe Their Jobs to the Recovery Act
NextTens of Thousands Could Lose Housing Assistance Under Proposed Funding Cuts
Stay up to date
Receive the latest news and reports from the Center