Lawmakers Fiddle While the Unemployed Get Burned

As Congress dithers over the latest jobs bill, unemployed workers throughout the country face another week of uncertainty about their unemployment insurance (UI) benefits. A needed extension of the temporary UI benefits and subsidized COBRA health insurance in last year’s Recovery Act is being “held hostage” (as the New York Times puts it) to misguided budgetary concerns and wrangling over how big a tax break wealthy investment fund managers should have. The details are complicated, but the bottom line is simple: today, unemployed workers have much less help than they did before the Recovery Act’s UI/COBRA provisions expired on June 2 — and much less than they need given the difficult labor market.

What all this means is that at a time when the average jobless worker has been looking for work for 34 weeks — the longest stretch on record — and there are five job seekers for every opening, unemployed workers in 36 states who run out of their 26 weeks of basic UI benefits get no additional help. Restoring these benefits and tackling the country’s huge jobs deficit should be Congress’s top priority. It’s past time for lawmakers to turn this map
Image

back into this one
Image 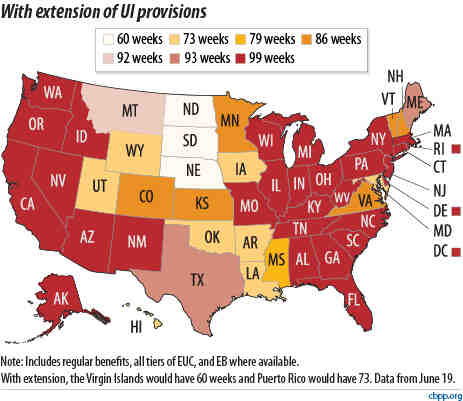 Topics:
Economy
PreviousThune Amendment to Jobs Bill a Recipe for a Government Shutdown
NextWhy Closing the S Corporation Loophole Is a Good Move
Stay up to date
Receive the latest news and reports from the Center