When Kansas enacted a major tax cut in 2012, many state lawmakers predicted it would spur economic growth.  Instead, economic performance in Kansas has been unimpressive, and updated projections from its Division of the Budget offer no reason to expect that the state’s economy is about to boom.  Personal income in Kansas will grow more slowly than U.S. personal income in 2014 and 2015, according to the new forecast (see chart).

The state’s budget office also projects that gross domestic product (GDP) in Kansas will lag the nationwide rate in 2014 and 2015.  That would mark a downward departure for the Kansas economy, which over the last two decades has generally kept pace with the national economy. 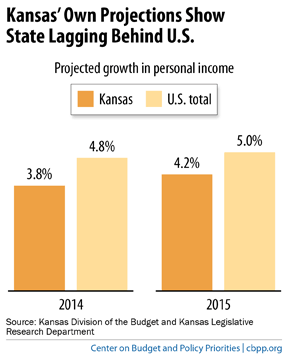 There’s no evidence to believe that the tax cuts will improve the economy in later years, either.  The vast majority of research finds that differences in interstate income tax rates have little or no impact on state economic growth.  For example, when six states made large tax cuts in the 1990s, their income and employment grew more slowly than the rest of the country.

The new forecast wasn’t the only bad news that Kansas received in the past few weeks.  Moody’s Investors Services downgraded Kansas’ credit, citing the revenue loss from the tax cuts as an important reason.  A lower credit rating could mean the state will pay higher interest rates in order to borrow money for public spending.  Moody’s also downgraded the credit of both the University of Kansas and Emporia State University, two of the state’s six public universities.

March 21, 2013
PreviousSenate GOP Plan Would Cause Millions to Lose Health Coverage or Block Them From Gaining It in the Future
NextCommunity Eligibility: A Path to Eliminating Hunger in Over 25,000 Schools
Stay up to date
Receive the latest news and reports from the Center