As Tax Day approaches, we’ve updated several backgrounders that explain how the federal government and the states collect and spend tax dollars.  As policymakers and citizens weigh key decisions on how best to shape our future federal government, it’s helpful to examine where the dollars that comprise the budget come from and where they go.

The next in our series of revised “Policy Basics” backgrounders explains where our federal revenues come from.

In fiscal year 2013, the federal government spent $3.5 trillion on the services it provides, such as national defense, health care programs like Medicare and Medicaid, Social Security benefits for the elderly and disabled, and investments in infrastructure and education, in addition to interest on the debt.  Federal revenues financed close to $2.8 trillion of that spending; borrowing financed the remaining $680 billion. 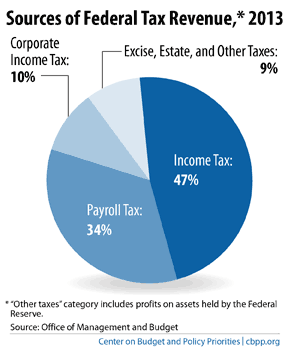 The three main sources of federal tax revenue are individual income taxes, payroll taxes, and corporate income taxes; other sources include excise taxes, the estate tax, and other taxes and fees (see chart).

Over recent decades, the share of federal revenues coming from individual income plus payroll taxes has grown, while the share from corporate taxes and other revenues has fallen.  The Great Recession and the policies enacted to combat it, including temporary tax cuts, depressed federal revenues below the typical levels of recent decades.  Revenues fell from 17.9 percent of gross domestic product in 2007 (the last fiscal year before the recession) to 14.6 percent in 2009 and 2010.  In 2013 they were 16.7 percent.  As the economy recovers, federal revenues are projected to return to higher levels.

Just the Basics: Where Our Federal Tax Dollars Go

The Reality of Tax Reform Math