“Tens of thousands of people will lose their jobs within weeks unless Congress extends one of the more effective job-creating programs in the $787 billion stimulus act,” the New York Times explained yesterday in an article on the TANF Emergency Fund. As one of these workers — a father of four who got a stimulus-funded job after being laid off from his job of 17 years — told the Times, “It’s very scary, because there’s just no work.” Most of the 37 states operating subsidized employment programs created them to respond to the recession, and all of these states agree that the programs are still needed. Yet many of the programs — including most of the largest ones — will have to close their doors on September 30 or shortly thereafter if Congress doesn’t extend the fund; others plan to greatly scale back operations (see map).
Image 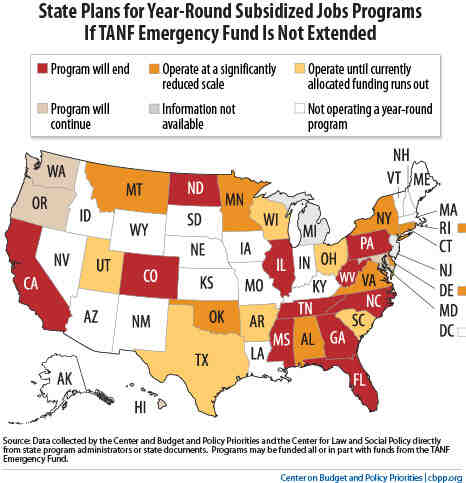