My latest post for U.S. News & World Report’s Economic Intelligence blog warns that jobless benefits will end abruptly for over a million Americans the week after Christmas, and many others who’ve recently become unemployed or will become unemployed next year will see them sharply curtailed, unless Congress extends emergency federal unemployment insurance (UI) before year’s end.  That would be bad for the economy as well as these jobless workers.  Here are some excerpts:

To combat the increased hardship and drag on the economy from rising unemployment and longer unemployment spells, policymakers in every recession starting in 1958 have enacted a temporary federal UI program to provide additional weeks of federal benefits. 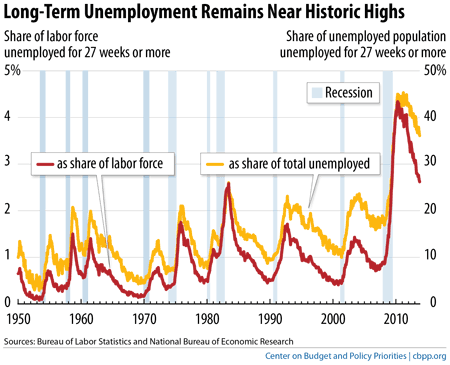 The current program, Emergency Unemployment Compensation (EUC), was enacted in June 2008, relatively early in the Great Recession. . . .  EUC is scheduled to expire at the end of the year, however, abruptly dropping the maximum number of weeks available to 26 or fewer, even though long-term unemployment (27 weeks or longer) remains much worse than in any previous recession (see chart).

Unfortunately, the only policymakers with the EUC expiration on their radar screen are House Ways and Means Committee Republicans — and they want to kill the program. . . .

To be sure, EUC has lasted a lot longer, helped a lot more unemployed workers, and paid out substantially more in benefits than the programs enacted in past recessions.  But that’s because the blow to the economy and especially the labor market from the Great Recession was so much worse.  In fact, without the consumer spending UI generated, the recession would have been even deeper and the recovery even slower, according to conventional economic analysis. . . .

EUC benefits help create that additional demand and contribute positively to job creation.  The economy is still too weak and unemployment is still too high to let the program expire.

It’s the Great Recession, Not the Great Vacation, That’s Responsible for High Unemployment

October 7, 2013
PreviousShaping a Deal to Replace Sequestration
NextTrade Agreement Threatens to Increase Drug Prices
Stay up to date
Receive the latest news and reports from the Center