Increase the EITC to Help Lift "Childless Workers" Out of Poverty

It’s time for policymakers to fix a glaring hole in the Earned Income Tax Credit (EITC), as I explain today in an op-ed for National Journal:

While the tax credit reduces poverty among families with children by double-digit percentages, as a recent Congressional Research Service report found, it does little or nothing to help low-wage workers who aren't raising minor children. A “childless adult” working full time at the minimum wage — an annual income of just $14,500 — earns too much to receive the credit. As a partial result of the now-limited EITC, childless workers are the sole group of workers that the federal tax system pushes into — or in many cases, deeper into —poverty.

Indeed, as we detail in a new paper, about 7 million childless workers are taxed into or deeper into poverty by federal taxes (see chart).
Image 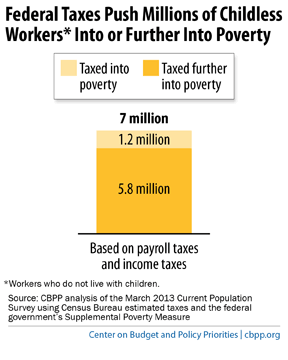 Many so-called “childless workers” are non-custodial parents who have financial and parenting obligations. The President's proposal to expand the EITC would benefit about 1.5 million non-custodial parents. Their children do better when these parents are working and are a positive force in their lives. Additionally, many childless workers are future parents. Extending the EITC's pro-work benefits to them would boost their incomes today while improving their future ability to provide for their children. And a child's success also depends on his or her extended family and community. A stronger EITC for “childless” adults can support children's siblings, uncles, aunts, and grandparents, who may be considered “childless” for tax purposes even if they live in the same home as their younger relatives. By helping to increase work, and possibly improve marriage rates and reduce crime, a stronger EITC can also help strengthen the communities in which children live.

Click here to read the National Journal op-ed and here to read our full paper on the EITC for childless workers.