This week on Off the Charts, we focused on jobs, the federal budget and taxes, state budgets and taxes, food assistance, and Disability Insurance.

This week, Chad Stone released a statement on the March jobs report.  We published papers on the problems with the Tax Foundation’s “Tax Freedom Day” report and the impact of the Recovery Act’s boost in SNAP benefits, as well as a fact sheet on taxes and interstate migration.  We updated our reports on the “doc fix” compromise and IRS funding cuts and our chart books on Disability Insurance and the legacy of the Great Recession.  We also updated our backgrounders on tax exemptions, deductions, and credits; unemployment insurance; marginal and average tax rates; federal payroll taxes; and deficits, debt, and interest.

CBPP’s Chart of the Week – The March Jobs Report shows Lingering Slack in the Labor Market: 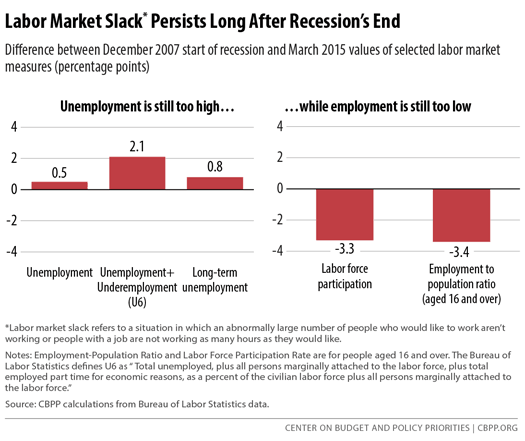 Republicans have a new plan to cut taxes for the top 0.2 percent
Washington Post
April 1, 2015

As the G.O.P. Promises to Address Inequality, Follow the Money
New Yorker
March 27, 2015