This week on Off the Charts, we focused on the congressional budget plans, federal and state taxes, health, and housing.

This week, we released papers on the congressional budget plans’ disproportionate cuts in programs for people with limited means, proposed cuts to Pell Grants for higher education, the compromise to fix Medicare’s physician payment formula and extend CHIP, and how the Obama budget restores housing vouchers. We posted a fact sheet on  big cuts in state income taxes not yielding promised benefits and a paper on state innovations in leveraging technology for health and human services.  We updated our reports on eliminating the estate tax and ten facts you should know about the estate tax. We also updated our backgrounders on unemployment compensation and the estate tax.

CBPP’s Chart of the Week – House, Senate Budget Plans Each Get 69 Percent of Cuts From Low-Income Programs: 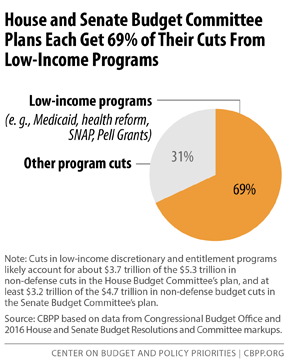 The Misguided Crusade to Kill the Estate Tax
US News and World Report
March 27, 2015

As the G.O.P. Promises to Address Inequality, Follow the Money
New Yorker
March 27, 2015

This is no way to ease inequality
Washington Post
March 22, 2015

Join the Full Employment Project of the Center on Budget and Policy Priorities on March 30 for a keynote speech by former Federal Reserve Chairman Ben Bernanke and a discussion by leading economists about policies that can help restore and maintain full employment in U.S. labor markets. RSVP