| By CBPP
In this busy week for Off the Charts, we focused on the budget plans from the chairs of the House and Senate Budget Committees, food assistance, the safety net, and health reform. This week, Robert Greenstein previewed the congressional budget plans and issued statements on both the Price and Enzi plans. We posted papers on the impact of “churn” in health and human services programs and the House Budget Committee’s plan to slash SNAP by $125 billion. We updated our paper on SNAP enrollment and the economy, our backgrounder on unemployment compensation, and our reviews of state government SNAP websites and online services for low-income benefit programs. CBPP’s Chart of the Week – Illustrating the Priorities in the Price Budget:
Image 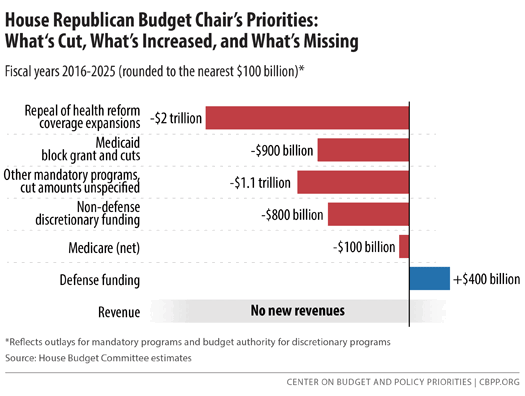 Join the Full Employment Project of the Center on Budget and Policy Priorities on March 30th for a keynote speech by former Federal Reserve Chairman Ben Bernanke and a discussion of leading economists about policies that can help restore and maintain full employment in U.S. labor markets. RSVP Don’t miss any of our posts, papers, or charts — follow us on Twitter and Instagram.

Share
Facebook Twitter Print Email
PreviousLearning What Works: SNAP’s New Employment and Training Demos
NextHouse, Senate Budget Plans Each Get 69 Percent of Cuts From Low-Income Programs
Stay up to date
Receive the latest news and reports from the Center