If You Think Income Inequality Is High, You Should See Wealth Inequality

| By Chad Stone
This week, the Federal Reserve made headlines for something other than monetary policy when it released its latest statistics on family income and wealth.  The headline finding:  U.S. families’ wealth dropped sharply between 2007 and 2010, especially among middle-class homeowners.  In my latest post for US News & World Report, I dug into the Fed’s data to see what they show about the distribution of income and wealth. No surprise:  wealth (the stock of assets like savings, stocks, vehicles, homes, business and financial assets less debt like mortgages and credit card debt) is much more highly concentrated than income (the flow of money coming in over the course of the year from earnings, dividends and interest, Social Security, and so on).  We don’t yet have statistics on the top 1 percent from the Fed data, but as I report in the US News post: 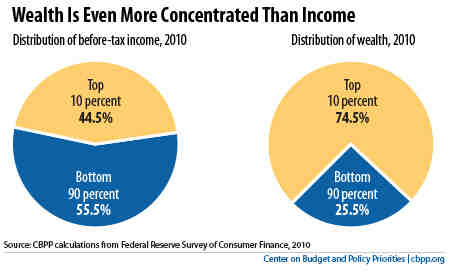 The Fed data on the distribution of wealth are available only at three-year intervals, but it looks as though something similar may be going on with wealth over the past several years.  As I point out in the US News post, “The rich took a hit in the financial crisis and Great Recession, …[but i]t appears that the financial wealth that dominates the net worth of the top 10 percent fell less (or rebounded more in 2009-10) than the housing wealth that accounts for most of the typical family’s net worth.”